By Gregory Adams
Published Feb 26, 2014
Try not to lose your head over this, but soundtrack experts Mondo have announced they're about to deliver a vinyl reissue of Jerry Goldsmith's haunting score to '70s horror classic The Omen.

In what's no doubt a good sign for vinyl lovers, though maybe not your nanny, Mondo are delivering the first wax edition of the score since its initial pressing back in 1976, Bloody Disgusting reports. It arrives March 4 on 180-gram black vinyl, as well as on limited "Mark of the Beast Translucent Red." Despite the movie's focus on demon child Damien, the latter isn't being pressed up in a run of 666, but instead a smaller batch of 200.

While still kicking off the frightening, Latin chant-heavy "Ave Satani," the neoclassical soundtrack has been expanded to include nine additional tracks that didn't figure on the OG vinyl release. Expanded editions of the soundtrack have, however, popped on CD over the years. You'll find the details for the new reissue down below.

Phantom City Creative, who had recently cooked up the creepy artwork for Mondo's Halloween repress, has been tapped to deliver the artwork for this latest release. You'll find the skele-buddies featured on the cover up above and can check out the hound-equipped inner gatefold below.

This is the second time Mondo has celebrated composer Jerry Goldsmith, having delivered a repress of Poltergeist in 2013. 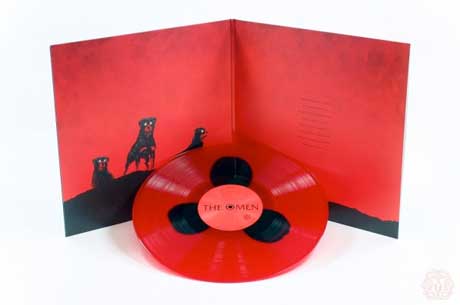