By Josiah Hughes
Published Jun 14, 2017
Gene Simmons is apparently in need of a new hobby. The long-tongued KISS bassist was recently spotted hanging around Toronto's Pearson International Airport with former Prime Minister Stephen Harper, and that's not even the dorkiest thing he did this week. He's also trying to trademark the "rock on" devil horns.

According to The Hollywood Reporter, Simmons filed an application to patent the familiar hand gesture used by rock-loving dorks the world over.

Here's a drawing that was included in the patent application: 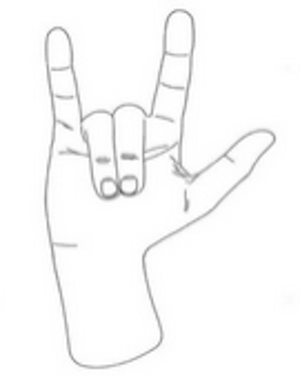 Of course, the gesture has existed long before KISS. John Lennon made the same hand signal on the cover of the Beatles' "Yellow Submarine"/"Eleanor Rigby" single. The hand signal also has a lengthy history dating back to 5th Century BC. The hand signal is also used to say "I love you" in sign language.

Perhaps the most frustrating aspect of this whole thing is that Simmons insists on doing the devil horns gesture with his thumb sticking out, like a damn nerd. Beavis and Butthead would not approve.