By Alex Hudson
Published Nov 08, 2013
We're guessing that more than a few folks dressed up as Daft Punk this Halloween, but we're willing to bet that these two youngsters have the most accurate costumes around. How are their costumes so awesome? Because those two little guys above are actually Daft Punk members Thomas Bangalter and Guy-Manuel de Homem-Christo's children.

This adorable photo shoot took place for the Wall Street Journal, which featured Daft Punk in its "Innovators" issue, naming the duo the Entertainment Innovators of the Year. The snaps were taken by Terry Richardson and also feature model Gisele Bündchen.

Bangalter and de Homem-Christo each have two children, so we're not sure what combination of their kids that is. Perhaps, after the shoot, the little guys spent some time playing with Daft Punk action figures.

Daft Punk — the adults, not the kids — showed up at the Wall Street Journal's Innovator Awards gala earlier this week to accept their Entertainment Innovators prize, which was handed to them by "Get Lucky" collaborator Pharrell Williams. You can watch an Instagram video of the pair receiving the award below, where you'll also find the Wall Street Journal cover.

Read their interview with the Wall Street Journal here. 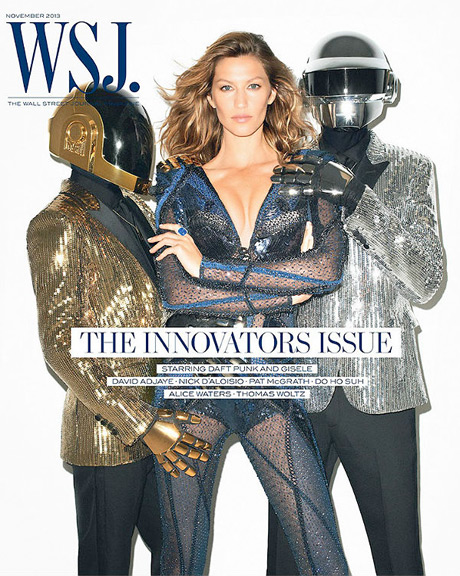