By Gregory Adams
Published Oct 17, 2014
While contemporary composer Cliff Martinez's work on Cinemax medical drama The Knick has already been showcased on CD and as a digital release, if you wanted to, well, knick the score on vinyl, you're in luck. A wax pressing of the score lands December 23 through Milan Records.

A new listing confirms that the collection arrives as a double-LP package, with modified cover art. While the earlier release sported a picture of Clive Owen and the rest of the cast prepping for surgery, the vinyl edition puts on display the front doors of the early 1900s-set show's Knickerbocker Hospital. You can see the cover art up above.

The tracklisting also differs from the 20-song CD and digital editions, filling the two-record spread with an extra 14 tracks. You'll see an image of the back cover down below, and you can pre-order the release here.

As previously reported, it's been a busy year for the Drive composer. Earlier in 2014 he had his My Life Directed by Nicolas Winding Refn score delivered through Milan Records, and the composer also announced he'd attached himself to HBO's The Normal Heart. 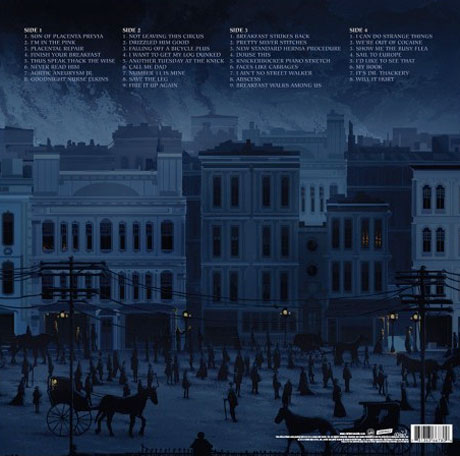