A a link tweeted by Aphex Twin earlier today (August 19) ends with .onion, a domain tag that is often associated with the TOR proxy browser that offers access to the Deep Web.

If you can work your way to the link in question, you'll find text that suggests Aphex Twin has a new LP on the way called Syro. You can see a screen grab of the info, which also appears to have a tracklisting embedded within the code, below via Pitchfork. You can also visit a site via a regular browser over here, though it's missing some of the key album details.

As previously reported, a yellow blimp bearing the Aphex Twin logo was spotted flying over the Oval Space in Hackney, England, over the weekend.

Back in 2010, James announced he had six albums in the works, including two "very non-commercial, abstract, modular-synthesis, field recordings" completed back in 2006.

"Another one is Melodies From Mars, which I redid about three years ago," he had said at the time. "There's one of stuff I won't go into; a comp of old tracks, which is never really finished and always changing; and then one I'm working on now. There are also loads of tracks which don't belong anywhere." 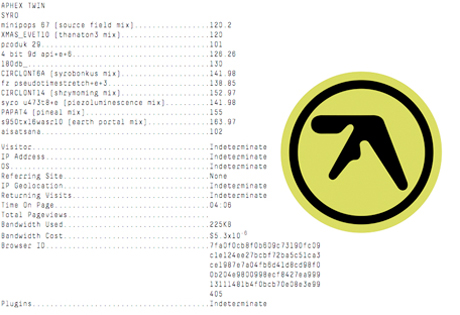