A Kurt Cobain Self-Portrait Is Heading to Auction

By Allie Gregory
Published May 26, 2021
If one thing is clear in such uncertain times, it's that dusty old Nirvana memorabilia will always be worth a pretty penny. As we've seen in recent past, Kurt Cobain's hair, sweater and guitar have fetched thousands (if not millions) of dollars at auction, so naturally, another archival product is heading to market: a self-portrait done by the late artist himself.

The item in question was listed by photographer Jacque Chong, who worked with Cobain during Nirvana's Nevermind tour. Gifted to Chong back in 1992, the felt-pen drawing done by Cobain depicts a wild-eyed musician playing a guitar and is signed "Kurdt Kobain Rock Star." In addition to the scribbled portrait, the image also reads: "I don't know how to play and I don't give a hoot!"

At that modest price, the drawing comes in as one of the cheaper Cobain auction items sold in recent memory, after his MTV: Unplugged guitar took home a record $6 million courtesy of Julien's just last summer.

If we're talking paper products, last year, the late artist's home insurance policy — you know, for the house where he died — was listed at auction for a whopping $100,000 USD.

See the latest Cobain auction item and its description below. 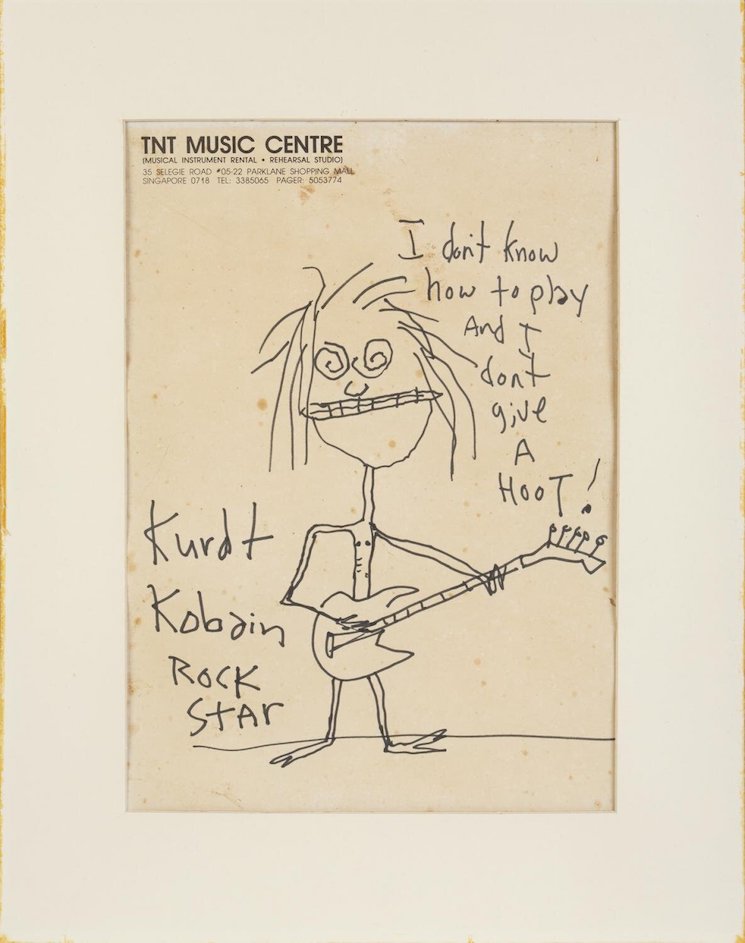 Cobain made the drawing and gifted it to Jacque Chong, a freelance photographer who worked with Cobain during Nirvana's Nevermind album promotional tour in Singapore in 1992. Independent label Dover Street Market Ginza has previously reproduced the drawing on its fashion apparel, with Chong's permission.