In 1996, science fiction disaster film Independence Day saw the human race take on alien life forms in a war for Earth with mankind proving victorious. The highest-grossing film of that year, it was also lauded for further bolstering a rising interest in science-fiction media at the time.

Sequel Independence Day: Resurgence, helmed once again by director Roland Emmerich, sees the Earth come under threat two decades after the initial attack. In those 20 years, the human race has rebuilt itself to be stronger and better prepared for any further attacks from outside worlds.

Before catching a screening of Independence Day: Resurgence in theatres nationwide on June 24, read our timeline of how the human race has recovered and restructured since the War of 1996 below. 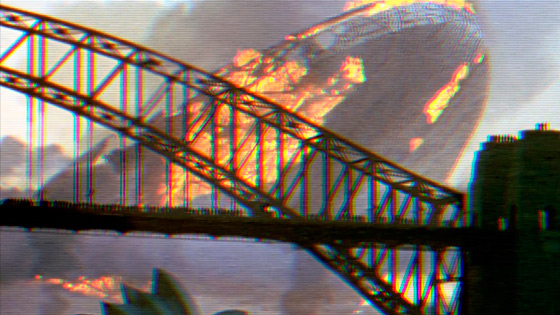 An alien mothership enters the Earth's orbit and deploys a total of 36 satellite crafts, each sent to target major cities and monuments around the globe. Using high-powered energy weapons, the satellite ships reduce their targets to rubble, with the Earth losing 108 cities in a 48-hour period. A globally united counterattack destroys the mothership and its destroyer vessels, putting an end to the alien threat.

The alien threat has been stopped in its tracks, save for a small group of alien survivors whose destroyer ship crashed in a remote area of the Democratic Republic of Congo.

With the threat having been quelled, the world begins to rise from the ashes, rebuilding cities and global landmarks. The White House in Washington, D.C., the Taj Mahal in Agra, India and Big Ben in London, UK are all returned to their glorious states.

Following the near destruction of the human race, leaders from major world powers decide to unite and set aside their differences in the interest of strength in numbers. It's an unexpected outcome, but the countries are able to transcend their deep-seated political distrust, former conflicts and petty disagreements to better the world and effectively foster cooperation between nations.

Following the formation of a peaceful alliance between nations only two months prior, the United Nations creates the Earth Space Defense program (ESD). Its mandate is to serve as a warning system in tandem with acting as a global defense unit. Upon its creation, the ESD launches a worldwide recruiting campaign. 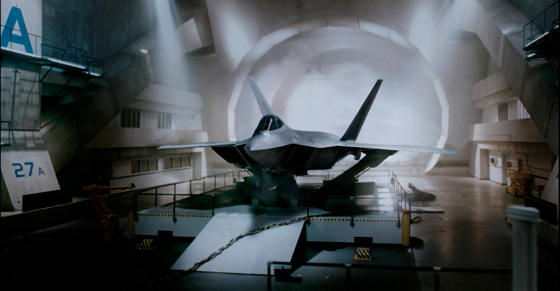 Upon recovering foreign shield technology from the alien race, the ESD applies their new findings to a Lockheed Martin F-22 Raptor, a United States stealth fighter jet. Conducted to test integration of alien tech into future aircraft, the experiment is a success, paving the way for further military advancements the ESD will make nearly a decade later.

Once recognized as a destination for excitement and entertainment, the city of Las Vegas, Nevada was entirely destroyed in the wake of the alien mothership's crash. As a result, it's now a grim symbol of the invaders' attack, and serves as a memorial to the War of 1996, with thousands of survivors visiting the untouched wreckage.

A band of Congolese soldiers wage war against the remote group of alien survivors that found shelter in the country in 1997. While the ESD is aware of the issue and repeatedly offers help in defeating the last holdouts, the Congolese government aggressively refuses. The conflicts will continue to be fought for an additional five years.

American scientists make further advancements toward co-opting alien technology for their own military benefit, fuelled by new data found from recovered alien weaponry. Naturally, some initial controversy about exploiting such technology is brought to the table, but a demonstration of the new hybrid artillery's capabilities puts any fears to rest.

Senator Lucas Jacobs, the former Army Lieutenant General during the War of 1996, is sworn in as the 44th President of the United States of America. He is recognized by voters for his strong international relationships and continued involvement with the growth of the ESD program.

Rumours begin to spread that there's a top-secret alien prison situated beneath Area 51, a location already surrounded by secrecy. Though public speculation increases, the ESD declines to answer questions as to what happened with captured aliens from the War of 1996, and offers no comment on the legitimacy of the secret prison.

A malfunction during a test flight for ESD's first alien hybrid fighter jet results in the death of Colonel Steven Hiller. During the War of 1996, Hiller played a crucial role in discovering more about the attacking alien species, as well as destroying the mothership and halting the invasion. Recognized as an icon worldwide, he is survived by wife Jasmine and son Dylan.

The Earth Space Defense moon base officially opens, with ESD Director David Levinson presiding over the ribbon cutting ceremony. Monitored by a command centre located in Beijing, China, the planetary base is armed with both offensive and defensive weaponry, while also being the first of several bases built to monitor potential alien activity within the solar system.

ESD Director David Levinson is the keynote speaker at the 2011 TEDx conference, at which he highlights a range of consumer products that were inspired by found alien technology. Such everyday items include smartphones with touch screens, bladeless fans, drones and security scanners set to be used in airports.

Following two terms of presidency served by Lucas Jacobs, Elizabeth Lanford is sworn in as the 45th President of the United States, becoming the first woman in history to lead the country from the oval office.

Following years of research and development from ESD scientists around the globe, next generation forms of hybrid alien vehicles and weapons technologies are introduced. A standout vehicle from the program is the H-8 Global Defender Hybrid Fighter, praised for its speed, handling and offensive attack competence.

With the 20th anniversary remembrance of the War of 1996 approaching, President Lanford unveils a commissioned portrait of globally adored former president Thomas J. Whitmore. A former Persian Gulf War fighter pilot, Whitmore's valour and leadership in 1996 were crucial to ensuring a brighter future for the globe, and they're to be honoured by the newly ordered painting. 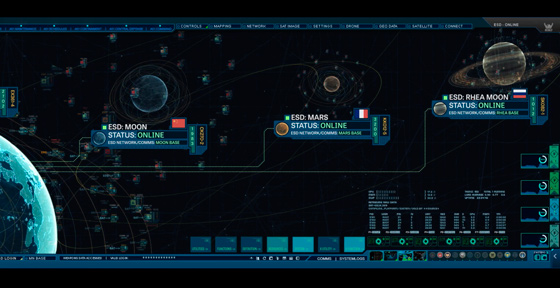 By 2016, the Fourth of July is now an international holiday celebrating world peace. Though Earth has been rebuilt stronger than many imagined, the ESD continues to prepare, just in case…

Independence Day: Resurgence is set to touch down in theatres nationwide on June 24. In the meantime, watch the trailer below. 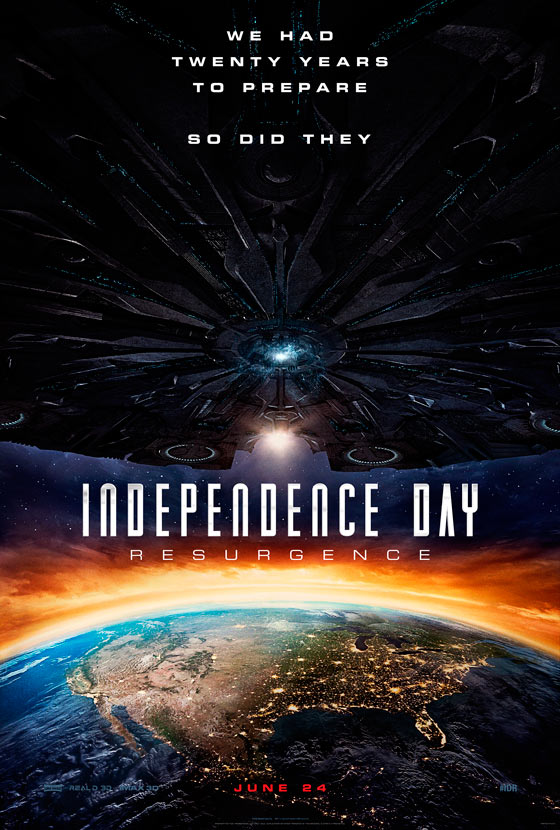