By Sarah Murphy
Published Dec 12, 2017
Despite garnering attention with a handful of Golden Globe nominations earlier this week, Lady Bird's perfect rating on Rotten Tomatoes has been tarnished.

But surly "smartest film critic in the world" Cole Smithey isn't the only one nitpicking Greta Gerwig's acclaimed flick. A number of goofs have been posted on the movie's IMDb page — and they're freakishly specific.

Some eagle-eyed viewers noted onscreen anachronisms within the film (which is set in Sacramento in 2002-2003), like airline logos that weren't created until 2012, yet-to-be-built airport terminals or freeway signs that weren't installed until years after the plot takes place. Someone even pointed out that the signage in a thrift shop was inconsistent with the business's early 2000s décor.

As for "factual errors," Jenna Walton's Range Rover model that appears in the film wasn't actually released until 2004.

And while all of those could easily be brushed off as honest (and totally inconsequential) mistakes — there are a couple of totally speculative IMDb complaints about things that didn't happen in Lady Bird, as well.

One submission claims that it's a factual error that the film takes place in Sacramento in the early 2000s and there's no mention of the 2002 Lakers vs. Kings Western Conference NBA Finals.

Another submission takes aim at the fact that the film is set in California's capital city, "yet none of the characters claims to be related to, works for, or even (accidentally or intentionally) runs into any state senator or representative."

Again, if you need a plot refresher, this movie is about a Catholic high school kid whose parents struggle to pull together application fees for college, let alone tuition. It's hardly surprising that the adults she is closest to — her unemployed father, nurse mother and the nuns at school — aren't politicians.

Just a theory, but maybe the real goofs here are the nerds that have the time and energy to dredge up hypothetical situations missing from films and then post about them in IMDb subsections.

Check out screenshots of the oddly specific grievances below. 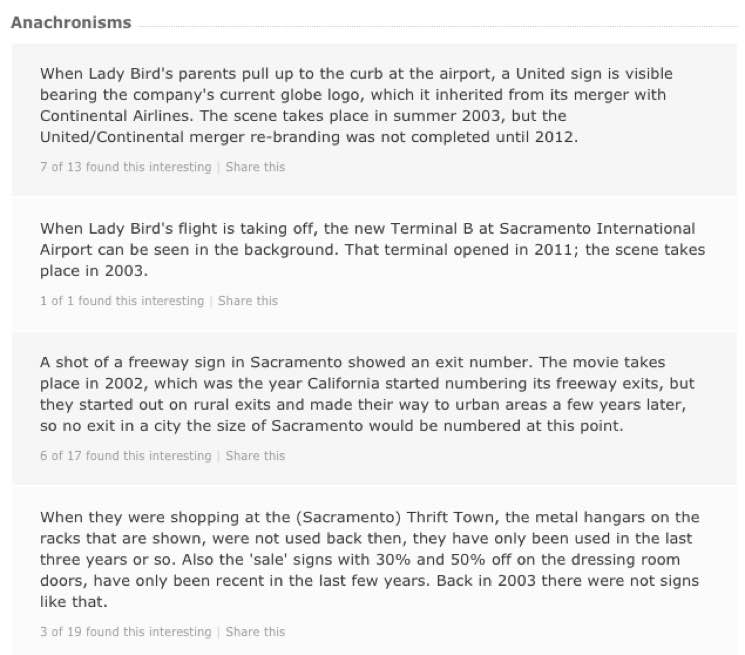 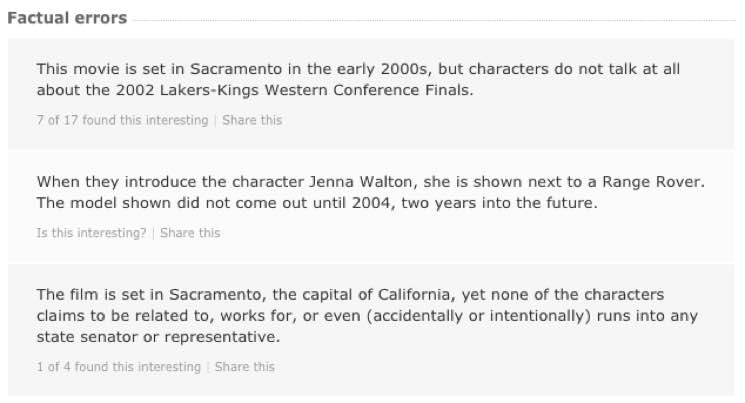