Nearly 20 years on from leaving his mark on the world of children's literature, Dav Pilkey's Captain Underpants character is set to hit the big screen for the first time this summer in DreamWorks Animation's Captain Underpants: The First Epic Movie. Not only will the film bring the brief-sporting superhero to a new generation of readers and viewers, it also boasts a stellar cast of comedic voice actors including Kevin Hart, Thomas Middleditch, Ed Helms, Nick Kroll, Jordan Peele and Kristen Schaal.

Fans of the studio's output will know that this isn't the first time DreamWorks has lined up a host of hilarious talent for their voice acting cast. From Shrek to Shark Tale and beyond, their film library has found some of comedy's biggest names bringing life to DreamWorks characters in ways only they can.

Before Captain Underpants: The First Epic Movie flies into theatres on June 2, look back on the other funny folks that have lent their talents to DreamWorks titles past and present.

Though voicing the swamp-dwelling ogre has now become one of Mike Myers' most recognizable screen achievements, the Canadian actor wasn't even first in line for the role. After Nicolas Cage initially turned down the part, the late Chris Farley was tapped to voice the character. Unfortunately, he passed away before the film was completed, leaving Myers to insist on a complete rewrite of the script to make the character his own.

Shrek's Scottish accent was an afterthought for Myers as well, who had also considered speaking with a country twang and a Canadian accent in voicing the character. As he told The Mirror in 2004, "I asked if I could redo Shrek Scottish, because it sounds working-class and I think ogres would be working-class." Myers added that he received a letter from studio founder Steven Spielberg after the film's release, saying, "the Scottish accent had improved the movie."

DreamWorks Animation is nearly a decade removed from releasing the first film in their Kung Fu Panda franchise, with multitalented funnyman Jack Black serving as the cornerstone in voicing main character Po Ping. With a trio of feature-length releases for the franchise under his belt, Black has said that his character has more in common with himself than some might realize.

"Po is really very much a young version of me," he explained to The Sydney Morning Herald last year. "It was what I was like when I was 16, 17. I had a big dreams of becoming an actor and musician and I would look up to my heroes in those realms just like Po looks up to his kung fu master heroes, and that's it really. I'm not doing a character voice or anything; I'm just remembering what it was like when I was a kid."

The release of Bee Movie in 2007 marked Jerry Seinfeld's first crack at writing and producing for the big screen. In looking for its animated world to look as accurate as possible, Seinfeld visited a beekeeper during the film's production stage to see how the hives looked and how a swarm behaved. As he told Collider in 2007, the keeper didn't believe in wearing protective equipment around the insects provided they handled them carefully enough. As Murphy's Law would have it, Seinfeld ended up getting stung.

Most recently, the film has enjoyed something of a second life as an internet meme, which Seinfeld is well aware of. In July of last year, he took to Twitter to gauge interest in a sequel, resulting in his question raking in over 50,000 likes. That many people can't be wrong.

Known for lending his voice to Marty, the ebullient zebra in the Madagascar film franchise, Chris Rock initially wanted the role of Alex the lion upon getting involved in the project. Not unlike the aforementioned Jack Black, Rock's animated animal persona was informed by his real-life experiences and traits.

During a 2005 cast roundtable, Rock explained, "my character bores very easily. The same thing that took him out of the zoo took me out of Brooklyn. As a child, I wanted to get out of Brooklyn immediately."

Ben Stiller ended up voicing Alex the lion instead, with his work on the franchise causing him to change his stance on animal captivity. As he told The Guardian in 2012, "I used to be for it. Now I'm against it. I don't love zoos; I've taken my kids to them but I saw that documentary a couple of years ago, The Cove, and that affected me in terms of knowing how these dolphins get into these dolphin parks. So I stopped supporting them. But it always does feel a little bit wrong when you see the animals in the cages at the zoo. And I don't have dolphin soup anymore."


How to Train Your Dragon – Jay Baruchel

After first voicing protagonist Hiccup Horrendous Haddock III in 2010's How to Train Your Dragon, Jay Baruchel hasn't been shy in expressing his enthusiasm for the franchise, having continued on with his character through its expansion to short films and a television series.

As Baruchel told UPROXX in 2010, watching an early cut of the first film that was only 85% animated resulted in some intense emotions, saying, "I was still blown away and it kind of reduced me to tears."

"I knew [the first film] would be pretty looking, but I didn't realize how incredible the action sequences would be," he continued. "It was like I had an idea of the best case scenario of it how it would turn out and it was that times a million."

Years before the big screen debut of Captain Underpants, Megamind was another superhero comedy from DreamWorks that featured a voice acting line-up of quality comics that included Will Ferrell, Tina Fey and David Cross. Drawing on their experiences in the world of comedy, the trio's improvisational skill was welcomed by director Tom McGrath.

In a 2010 roundtable interview, McGrath revealed that "30% of what you hear in the scenes is improvised in ways where not only are [Ferrell, Fey and Cross] great actors, they're great writers as well." He noted that for each line in a scene, the trio would deliver an alternative that was funnier than what was written.

"Sometimes Will and Tina got to record together but David would improvise one month," McGrath continued. "We'd get Will the next month. He would play off what David had done. We'd go back to David a month later with what Will had done." 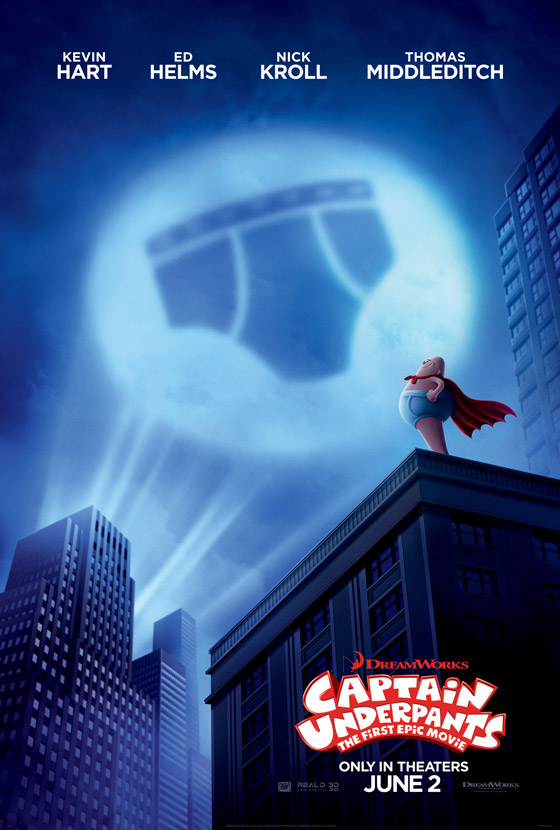