Silicon Valley's CEOs are the 21st century's rock stars. Need proof? Turn on TMZ or check your nightly news and you're likely to find the world's biggest tech billionaires engaging in all sorts of ostentatious, indulgent and unusual behaviour alongside other more recognizable celebrities of the day.

In Fox's latest comedy, Why Him? (in theatres across Canada on December 21), Ned Fleming (played by Breaking Bad's Bryan Cranston) encounters such an individual when his daughter (Zoey Deutch) introduces their family to her new boyfriend, Laird Mayhew (played by James Franco), a wealthy and famous entrepreneur, during a holiday visit. When Papa Fleming catches wind of Laird's intentions to propose to his daughter in five days' time, he decides to do whatever it takes to ruin their relationship; Laird, on the other hand, will stop at nothing to become part of the family.

With that in mind, we decided to dig deep into the histories of the internet age's most out-there international playboys. Here are seven of the strangest stories about their lives and exploits that we could find.

The Seven Strangest Things Silicon Valley CEOs Have Ever Done:

Elon Musk Ruins One of the Rarest Cars of All Time

It's only been 16 years, but SpaceX/Tesla Motors superstar Elon Musk is already making a good case for being this century's biggest visionary. Before he was plotting out missions to Mars or rethinking the way we use energy or our day-to-day commutes, though, he was just like any 20-something with too much money and prone to making bad decisions.

In 1999, after selling his startup, Zip2, for more than $300 million, the 28-year-old entrepreneur decided to treat himself and bought a McLaren F1, one of the fastest, rarest (only 64 existed at that time) cars in the world. A camera crew from CNN even came to document its arrival. (Click the video below to see.)

A short while later, while driving around with Peter Thiel, the PayPal co-founder asked, "So what can this do?"

Musk replied, "Watch this." Minutes later, the car was airborne, spinning three feet off the ground before landing in a heap. The really ridiculous part: It wasn't insured yet.

Watch him explain the full story in his own words below.

Contrary to how he was depicted in The Social Network, Facebook CEO Mark Zuckerberg apparently isn't as scary as Aaron Sorkin and David Fincher made him out to be. That being said, the guy did have some strange dinner habits in 2011.

Every year, Zuckerberg sets an annual challenge for himself. Some are low-key, like the time he wore a tie every day to show how "serious" his team was after the 2008 financial crisis. But in 2011, in an attempt to move towards vegetarianism and "practice thankfulness [and] be more connected to the food I eat," Zuckerberg decided to take his life into his own hands by taking the lives of others.

"I just killed a pig and a goat," he wrote in a Facebook note on his private page that May, going on to explain his goal for the year. His 847 friends responded with a mixture of disgust and approval. He later posted a photo online of a chicken whose heart and liver he ate, and explained how he used its feet for stock.

Pretty strange stuff for a guy so rich he could probably create a veggie-based protein almost identical to meat if he really wanted to.

Silicon Valley's original bad boy CEO, Steve Jobs' peculiar persona and outlandish activities are the stuff of legend. But it was the weird way he went about parking at his company's headquarters that really left people scratching their heads later in his life.

Not only did the guy drive a silver Mercedes SL55 AMG sports car with no license plates to work every day, but he repeatedly parked in handicap spots — not the best idea for someone who wants to be inconspicuous.

"He seemed to think the blue wheelchair symbol meant the spot was reserved for the chairman," Apple veteran Andy Hertzfeld once wrote. And he may not have been joking, because there are photo galleries that practically support the theory.

If there are two things Mark Cuban knows, it's big business and basketball. But the Shark Tank star could learn a thing or two about shutting his big mouth.

The Broadcast.com founder-turned-Dallas Mavericks owner got into some trouble back in 2002 when he said the league's manager of officials, Ed T. Rush, was so bad at his job he "wouldn't be able to manage a Dairy Queen." He was forced to pay a $500,000 fine and, weirdest of all, work a day at a local Dairy Queen after the company publicly stated it was offended by the remark.

To date, he's paid $1.665 million in fines to the NBA for similar outbursts and (we presume) will never enjoy a DQ Blizzard the same way again.

Super nerd-turned-Napster-co-founder-turned tech mogul Sean Parker was notorious throughout the 2000s for his love of cocaine and women, but he decided to put his old ways behind him when he wed Alexandra Lenas in 2013.

One thing that didn't change, though: his love of ostentatious, over-the-top parties.

Coming in at $4.5 million USD, the three-day ceremony took place underneath a canopy of majestic redwoods in Big Sur, California and included: Tolkien-esque costumes designed by Lord of the Rings designer Ngila Dickson to be worn by all 364 guests; pigs on spits; a nine-foot-tall cake; bunnies for any attendees looking for a little cuddle (here's actress Olivia Munn with one); and Sting. Sounds terrible.

"If you have something that you don't want anyone to know, maybe you shouldn't be doing it in the first place," former Google CEO and current Alphabet Inc. chairman Eric Schmidt once said in an interview. Probably not the best choice of words for a guy who's done a lot of sketchy things he doesn't want people to know about.

The married father of two's infidelities have been tabloid fodder for years, including affairs with pianist Chau-Giang Nguyen, publicist Marcy Simon, media-relations executive Lisa Shields and former Forbes journalist Kate Bohner (supposedly the inspiration for Samantha in the Sex & the City series).

In 2011, he bought a $15 million USD penthouse at 31 West 21st Street in Manhattan, a.k.a. the lavish home Shia LaBeouf's character owns in the Oliver Stone movie Wall Street: Money Never Sleeps, and promptly had it soundproofed (ewww). He also owns a $72 million USD yacht that features a pool and a gym that can be converted into a nightclub — pretty surprising stuff for a guy who looks like the world's most boring accountant.

Last but not least is Oracle co-founder Larry Ellison, a veteran of the business who, according to Forbes, is currently the fifth-wealthiest person in the world with a net worth of $47.9 billion USD.

So what does one do with all that money? Buy islands, of course. In 2012, Ellison purchased 98% of Lanai'I, the sixth-largest island in Hawaii, for $300 million USD, and even bought an airline, Island Air, to ensure he had direct flights to his new home.

On top of that, unsealed documents during a recent lawsuit revealed that the guy regularly pushes his credit card past the $1 billion limit (yes, you read that correctly) by buying multiple yachts and homes.


Why Him? is in theatres on December 21. Check out the trailer below. 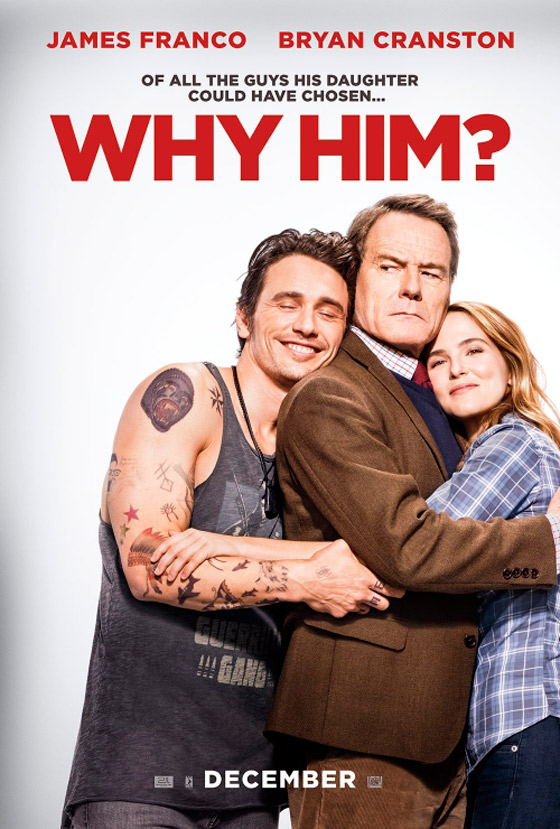