The world of espionage isn't quite as high-stakes as the James Bond film franchise has led us to believe. While they probably weren't offered laser watches or an Aston Martin equipped with machine guns, plenty of field agents have completed dangerous undercover missions using simple yet effective methods such as a clever disguises or a sharp tongue.

In Keeping Up with the Joneses, Jeff and Karen Gaffney (Zach Galifianakis and Isla Fisher) become tied up in an international espionage plot upon discovering that neighbours Tim (Jon Hamm) and Natalie Jones (Gal Gadot) are government spies using perhaps the most mundane cover of all: posing as a perfect suburban couple.

Before Keeping Up with the Joneses arrives in theatres on October 21, dive deep into the world of real-world espionage past and present with Exclaim!'s list of six daring undercover agents, below.

Recognized as one of the most successful undercover agents the FBI has ever seen, the now-retired Joaquin "Jack" Garcia successfully exposed the likes of corrupt politicians, police officers, terrorists, drug cartels and other organized crime groups in his 26 years of service, 24 of which saw him remain in cover without detection.

Garcia's most famous mission saw him infiltrate New York City's Gambino crime family in 2002 as "Jack Falcone," a self-described Italian jewel thief who was also an extortionist and hijacker. In playing the role, the 6'4", 390-pound Garcia loaded his wardrobe with expensive Italian suits, began carrying his money in a rubber band and watching food networks on TV to pick up culinary phrases, all while lavishing mob boss Greg DePalma with luxurious gifts to cement his role as an "earner."

Garcia's act was so convincing that DePalma eventually offered to make him a fully initiated member.

Virginia Hall's work for the Allied Forces in World War II earned her the label of "most dangerous of all Allied spies" by the Gestapo, one that the American-born spy upheld with three clever instances of using cover.

Upon being recruited by the British Special Operations Executive (SOE) in 1941, Hall was placed undercover in Nazi-controlled France as Brigitte LeContre, a French-American reporter for the New York Post. Under this guise, she spent 15 months in Lyon organizing an underground network of resistance fighters that sabotaged German operations.

Hall also wore a prosthetic left leg, the result of a hunting accident earlier in her life that required amputation from the knee down. She dubbed her prosthetic "Cuthbert," not realizing how much the name would come in handy after becoming known to her enemies as "the limping lady." Fleeing from German forces through the Pyrenees mountain range in winter, Hall radioed her superiors to tell them she would continue to hike though Cuthbert was giving her trouble. Forgetting the name, they reportedly radioed, "If Cuthbert troublesome, eliminate him," effectively keeping the limp a secret.

Working undercover in France for her home country weeks before D-Day, Hall combined the two aforementioned covers together in disguising herself as a goat herder. Wearing bulky padding and heavy clothing to hide her body shape and limp, she took note of German troop movements through wandering country roads.

As an investigator for the Colorado Springs Police Department in 1979, Ron Stallworth risked his life infiltrating a local chapter of the Ku Klux Klan as a black man, convincing recruiters he was white. In finding a call for members through a newspaper ad, Stallworth posed as a racist who used every slur in the book to express his interest in joining.

Every time the members of the hate group wanted to meet Stallworth in person, he would send a white co-worker in his place that would fill him in on conversations and other information. Stallworth also recalled that members and former Grand Wizard David Duke "never once picked up on the fact that they were talking to two distinct voices."

Stallworth gained the trust of the leaders over a nine-month period, relaying the chapter's demonstration plans to his department from the inside. Not long after that, the local chapter even looked to make Stallworth their leader for being a "loyal and dedicated Klansman."

While Josephine Baker is primarily remembered for her entertainment career and activism during the American Civil Rights Movement, her level of fame and notoriety proved to be the perfect cover for her work with French military intelligence in WWII.

Recruited as a correspondent by the French as they declared war on Germany in 1939, Baker attended social gatherings as herself, charming high-ranking politicians and bureaucrats into offering up information on war efforts, which she then reported back to the Allies.

Baker kept up appearances by using touring as her excuse to move throughout Europe, collecting information for the French resistance. To smuggle her findings past border guards and patrols who may not have been wooed by her star power, Baker wrote her findings of troop positions and other information on her sheet music with invisible ink. She also smuggled photos of enemy military installations to safer territory by pinning them to her underwear. Baker received both the French Croix de guerre and the French Resistance Medal for her efforts after the war ended.

Having been an agent with the Bureau of Alcohol, Tobacco, Firearms and Explosives for nearly 20 years, William Queen infiltrated the San Fernando Valley, California chapter of the Mongols motorcycle gang in 1998 as Billy St. John. From the moment he grew out his beard and hopped on a Harley, Queen climbed the ranks of the gang for two years, ultimately earning a place in their inner circle.

From the beginning, some Mongols members had their doubts. Field reports revealed that Queen was ordered to snort a line of speed to prove he wasn't a cop, which he later told the Washington Post he swept away without notice. He became a full-fledged member of the gang shortly afterwards, working his way up to becoming treasurer of the chapter.

In his 2005 book Under and Alone, Queen revealed that he was so deep under cover that he began to lose his proper identity to his new biker persona, experiencing emotional difficulty upon completing the mission.

After leaving a failed marriage in the Netherlands, Margaretha Zelle moved to Paris and took the stage name Mata Hari to make a name for herself as an exotic dancer and prostitute. She captivated audiences with both her confidence and provocative attitude, resulting in numerous affairs with high-ranking politicians and military figures.

As she travelled throughout Europe during the lead-up to World War I, British intelligence began to suspect she was a spy, possibly due to her birth in a neutral nation. Where her allegiances truly laid remained a mystery, causing her to be seen as a double agent. One account reveals a German military attaché paid her to obtain information on a forthcoming trip to France, while another saw her agree to act as a French spy in German-occupied Belgium after the prior arrangement with the Germans.

Suspected of being a double agent, Mata Hari was arrested by the French in 1917 and was sentenced to death by firing squad. While much has been made of her innocence in further historical investigations, the French files that documented her activities are slated for public release next year.


Catch 20th Century Fox's Keeping Up with the Joneses in theatres starting October 21. 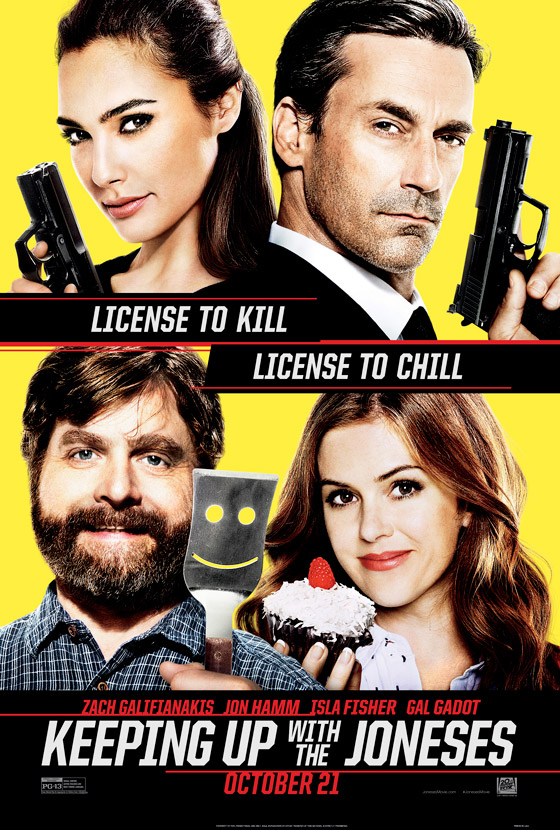