By Brock Thiessen
Published Sep 01, 2017
This year, Clive Barker's classic horror film Hellraiser is marking its 30th anniversary, and as such, a pile of celebratory releases are on the way, including some lavishly reissued versions of the soundtrack. In fact, the folks over at Death Waltz are even treating the soundtrack to a seriously intense looking box set that comes as a replica of the series' iconic puzzle box.

This morning (September 1) Death Waltz head Spencer Hickman took to the label's Instagram to show off a prototype of the upcoming box set, and as you can see above, it will actually come as a pretty massive version of the Lemarchand's box from the 1987 film. The box set will include six 7-inches housed inside a 8-inch x 8-inch wooden lament configuration box replica, complete with liner notes from Barker.

The box will be limited to 1,000 copies and cost $80 USD, with the set being only available exclusively online via Death Waltz/Mondo.

Of course, if the idea of bringing a gateway to such good suffering into your home seems a bit too risky, you can also pick up a more traditional two-LP version. This will arrive as on 180-gram vinyl inside a 425gsm gatefold sleeve featuring new art by Matt Ryan Tobin (see below). This version also comes with liner notes from Barker and "a cardboard replica lament configuration box."

A Mondo exclusive of this two-LP version will arrive on gold and brown swirl and be limited to 2,000 copies. A version on "clear vinyl with black smoke and gold color in color effect" will also be exclusively be available at a screening at London's Prince Charles Cinema on September 25 and another at L.A.'s Beyond Fest on October 6. This screening version is limited to 500 copies.

The box set version, as well as the two-LP version, both are set to go on sale October 6. Lakeshore Records will also be reissuing its own version of the soundtrack with different artwork. All versions have been remixed and remastered from the original two-inch analog reel to reel sessions.

"Even though the film was a low budget horror with a first-time director, Hellraiser towers over just about every other horror score recorded in the '80s," Hickman said in a statement. "Composer Christopher Young decided that instead of providing a typical '80s synth score, he would use a full orchestra to create a symphonic score that was epic is scope. It's a phenomenal piece of work; huge strings, waltz-like time signatures, and suites that run from the ethereal to downright scary in a matter of moments. We are thrilled to be releasing Hellraiser in congestion with Lakeshore Records for its 30th anniversary. This fully remastered sonic assault will tear your ears apart."

Additionally, Arrow Video will be releasing a new special anniversary edition Blu-ray SteelBook (featuring the same artwork) this fall, and Mondo will be putting out a new Hellraiser poster. You can get more details on those over here.

Here's me holding our Hellraiser box set prototype. On sale Oct 6. Featuring 6 seven inch singles in exclusive individual sleeves and an insert with liner notes from Clive Barker himself. Strictly Ltd to 1000 copies. If you miss out we'll have no tears please, it's a waste of good suffering + you can always pick up the regular LP version from either ourselves or our partners @lakeshorerecords . #cenobites #hellraiser #clivebarker 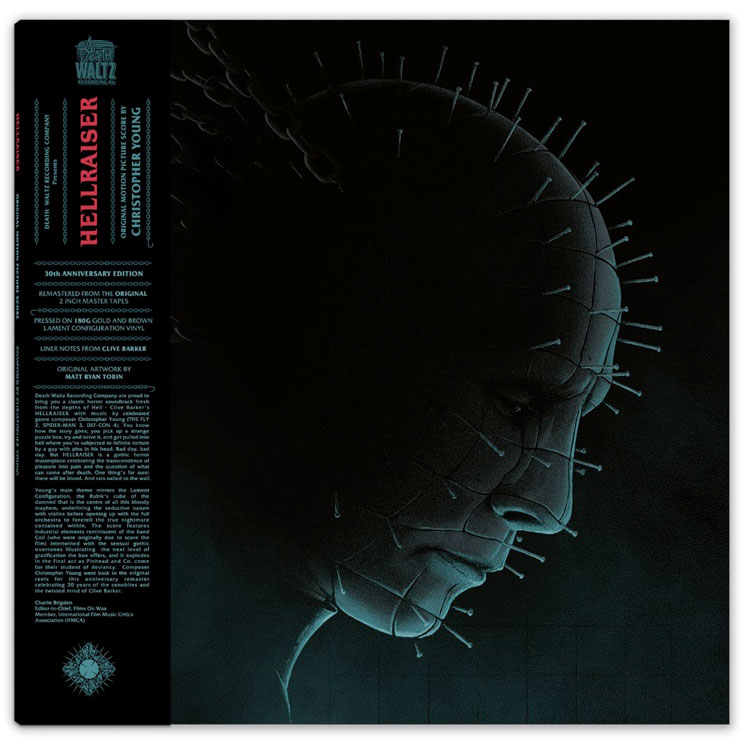