An Essential Guide to the 'Planet of the Apes' Films

It's been nearly half a century since Charlton Heston crash-landed on Earth (whoops, spoilers!) and helped change the course of modern sci-fi films — and our obsession with the Planet of the Apes has barely faltered since.

With the franchise's latest saga coming to a close with Matt Reeves' War for the Planet of the Apes on July 14, we decided to look back at the series' illustrious history.

Where this latest instalment will be ranked amongst the rest, only time will tell. In the meantime, here's Exclaim!'s Essential Guide to the Planet of the Apes.

Although the first film in the franchise was a major box office success, its sequel — Beneath the Planet of the Apes — had to be made on a budget half the original's size. Enter Ted Post, a veteran TV director brought on to work within the follow-up's financial constraints, and with a shortened shoot time to boot.

He made the most of it though, directing a bizarre story — with even more sci-fi tropes and social commentary (thanks to a screenplay from Paul Dehn) — about an astronaut who becomes stranded on the Planet of the Apes, only to discover an underground city filled with mutated humans who pray to a bomb capable of destroying the entire planet.

Reviews were mixed at the time, but Beneath the Planet of the Apes holds up surprisingly well, whether you're into it for its campy quality or dark doomsday narrative.

Fun fact: Contrary to a popular urban legend, the council chamber set was not reused in Superman (1978).

4. Escape from the Planet of the Apes
Directed by Don Taylor
(1971)

Cornelius (Roddy McDowall) and Zira (Kim Hunter) take control of a spaceship and enter a time warp just before Earth's destruction (following a cataclysmic explosion in the previous film), transporting themselves to then modern day California in this 1973-set sci-fi sequel (the third in the series). Aside from the slightly silly sight of two people in ape costumes hanging out with a bunch of humans (and a few hammier scenes), Escape from the Planet of the Apes is one of the few films in the franchise to fully break from the mould, exploring themes of celebrity culture, as well as animal mistreatment and confinement — pretty progressive stuff for a film that came out over 40 years ago.

Fun fact: An early script had scenes where Zira mistakes a toothbrush for a hairbrush and one of Cornelius playing golf. Thankfully, they were cut.

Moviegoers were nervous when they got wind that a relatively unknown British director (The Escapist's Rupert Wyatt) had been tasked with bringing the Planet of the Apes back to life, and with James Franco, no less. Thankfully, Rise of the Planet of the Apes reinvigorated the famed franchise due to a taut script from screenwriter-producer Rick Jaffa and his wife, screenwriter Amanda Silver, which paved a new path for the series while giving a few nods to the originals.

New Yorker critic David Denby described it as "one of the few films to use digital technology for nuanced dramatic effect" at the time. He wasn't wrong: visual effects company Weta Digital were nominated for an Oscar for their ground-breaking design and life-like apes, and star Andy Serkis was repeatedly praised for his portrayal of Caesar. Not only that, but Wyatt was honoured by PETA for his refusal to use real-life apes in the family-friendly film.

Fun fact: Caesar is shown putting together a puzzle of the Statue of Liberty in a not-so subtle scene that alludes to the original film's ending.

"Matt Reeves (Cloverfield and Let Me In) and his screenwriters organically mine conflict and suspense from the fragile nature of trust and the overwhelming allure of vengeance and power," Exclaim! film critic Kevin Scott said in his review of Dawn of the Planet of the Apes. "This isn't just one of the best films of the summer — it's likely to be one of the best films of the year."

Bloodier and with more battles than its predecessor, the film — shot in and around Campbell River on Vancouver Island — found Caesar and his crew forced to adopt arms and discover the horrors of war. Gary Oldman gave a gripping performance as the humans' appointed leader and antihero, but it was British actor Toby Kebbell who turned the most heads as Koba, an emotionally and physically scarred bonobo whose hatred for humanity ends up starting an all-out war.

With its look at modern society's increasing weaponization, Dawn of the Planet of the Apes is an unforgettable and pointed action-thriller.

Fun fact: The original movie poster shows a battle raging below the San Francisco Bay Bridge, but that scene never happened in the movie.

The story of an American astronaut and his crew who crash on an unknown planet, only to discover it's run by hyper-intelligent apes and is actually the remnants of Earth after a nuclear apocalypse, Planet of the Apes quickly established itself as a classic sci-fi movie thanks to ground-breaking special effects (courtesy of John Chambers), an acclaimed avant-garde score (composed by Jerry Goldsmith) and the ways in which it tackled topics related to racism, the Cold War and America's emergence as a military and technological superpower. Frequently cited as one of the most important movies of all time, Planet of the Apes broke barriers while being entertaining as well.

Fun fact: Although screenwriter Michael Wilson wrote the bulk of the dialogue, The Twilight Zone creator Rod Serling is responsible for the film's overall structure, as well as its twist ending.

Tim Burton has always been a bit of an acquired taste for filmgoers, but even his hardcore fans were left scratching their heads when his Mark Wahlberg-starring reboot of Planet of the Apes came to theatres in the summer of 2001 (the film was criticized for an overly confusing plot and ending).

Although a major hit at the box office, Fox opted out of a sequel; Its director didn't seem to mind — when asked about filming a follow-up, Burton reportedly responded: "I'd rather jump out a window."

And if that's not enough, there's always CBS' short-lived Planet of the Apes TV show (1974) and subsequent 13-episode cartoon series (Return to the Planet of the Apes), both of which can still be found on DVD.

War for the Planet of the Apes hits theatres across Canada on July 14. 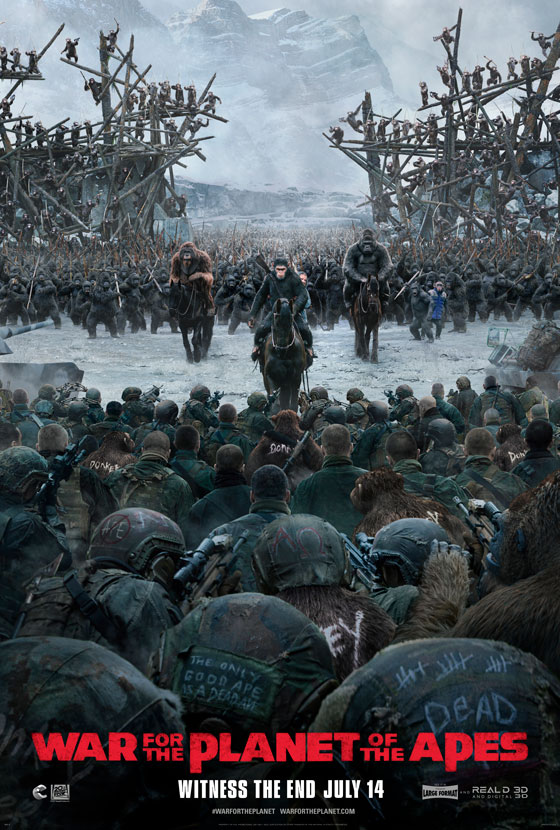