"We all know 'At the Hundredth Meridian' was Gord Downie's idea, not Mill Street's"

By Calum Slingerland
Published Feb 09, 2021
While the Tragically Hip have previously leant their band name and song titles to wine and cannabis, the group have now filed a lawsuit against Mill Street Brewery concerning the company's 100th Meridian Amber Lager.

In a lawsuit filed in Ontario Federal Court today, the Hip allege that the AB InBev-owned Mill Street "has engaged in a course of conduct to, unilaterally and without permission, ride on the coat tails of one of the most beloved bands in Canadian music history."

Specifically, the band cite Mill Street's marketing of the beer "with reference to the Tragically Hip and one of its many quintessentially Canadian chart-topping tracks, 'At the Hundredth Meridian,'" which appeared on their celebrated 1992 album Fully Completely.

Writing to fans in their "Tales from the Hip" newsletter, the band note, "We all know 'At the Hundredth Meridian' was Gord Downie's idea, not Mill Street's."

"Many of you are probably under the impression that we are associated with Mill Street's 100th Meridian beer — we are not. We knew there is some confusion out there, but we didn't know how much until recently," they continued, writing that they "tried to sort it out with Mill Street for months but were unsuccessful. They didn't take us seriously and were frankly disrespectful."

The Hip point to examples in which Mill Street "used our band name, our albums, and even Gord Downie's picture on their social media in connection with their 100th Meridian beer," two of which you can find below.

The suit accuses the brewing company of "[directing] public attention to its 100th Meridian in a manner that led, and continues to lead, consumers to believe that there is some connection between its 100th Meridian and the Tragically Hip."

Additionally, the suit alleges that "Until August 2020, Mill Street explicitly stated that the ingredients for its 100th Meridian are from Canada's 'Great Plains,'" which the band claim is "an obvious reference" to the song's chorus: "At the hundredth meridian, where the Great Plains begin."

The Tragically Hip's statement of claim can be read in full here.

"We have been around for a long time, and have always been able to work things like this out without a lawsuit. Unfortunately, not this time," the band conclude in their newsletter. "We took this step to clear up any confusion once and for all." 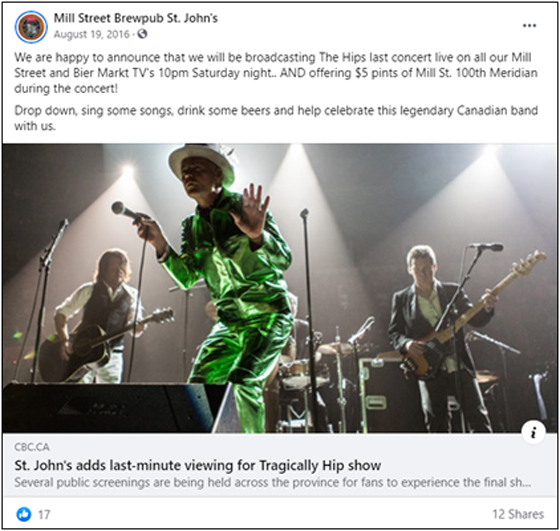 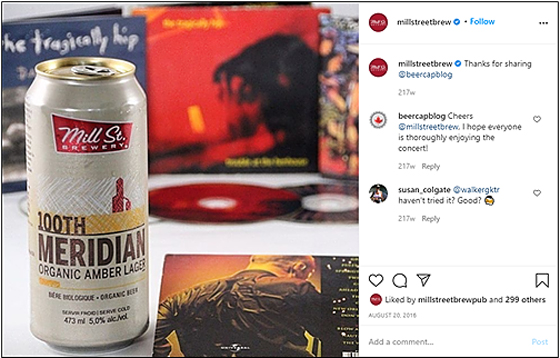