By Exclaim! Staff
Published Dec 02, 2019
In 2016, Stephen Hillenburg's iconic SpongeBob SquarePants characters made the leap from screen to stage with The SpongeBob Musical. Twelve Tony Award nominations later, the production is now set to debut north of the border this holiday season.

Led and conceived by director Tina Landau, The SpongeBob Musical is described by bookwriter Kyle Jarrow as "Our Town meets Armageddon meets SpongeBob," as the the beloved titular character and his home of Bikini Bottom face catastrophe until an unexpected hero takes centre stage.

The SpongeBob Musical also features a pop and rock-powered score created by a legendary roster of artists, including David Bowie & Brian Eno, Aerosmith's Steven Tyler and Joe Perry, Sara Bareilles, the Flaming Lips, John Legend, Panic! At the Disco, T.I., They Might Be Giants and more.

"If you're going to do a musical, you want different vignettes into different emotions, and I think each one of those artists are going to bring something so entirely new and different," Panic! At the Disco mastermind Brendon Urie said of the score. 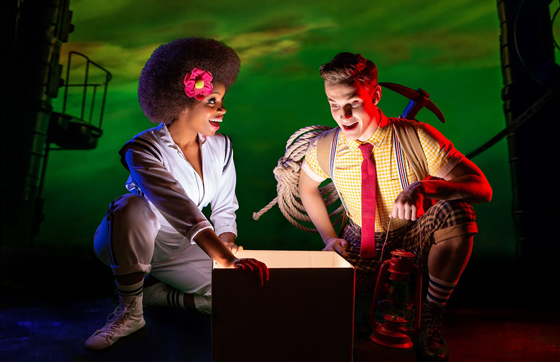 The SpongeBob Musical made its world premiere in June 2016 at Chicago's Oriental Theatre (now known as the Nederlander Theatre), prior to a Broadway premiere at the Palace Theatre in December of the following year.

Along with its 2019 North American run, the show will also be treated to a Nickelodeon television special featuring members of the original Broadway cast, set to air on the network December 7.