By Gregory Adams
Published Aug 09, 2013
With Janelle Monáe's new The Electric Lady set to drop in just over a month's time, the R&B android has now revealed that it will arrive as a two-disc package.

The tracklisting for the album, due September 10 through Bad Boy/Atlantic, confirms that it will contain 19 new songs, plus four bonus tracks. These will act as Suites IV and V in Monáe's ever-expanding catalogue.

UPDATE: It turns out that the two-disc version will only be a Target exclusive and feature the cover below. The standard cover is now above.

As expected, previously teased tracks like "Dance Apocalyptic" and the Erykah Badu-assisted "Q.U.E.E.N." figure on the album.

As previously reported, the record will also feature a duet with Miguel called "PrimeTime," as well as a collaboration with Prince called "Givin Em What They Love." Of the latter, Monáe previously explained, "It's a beautiful thing to have a friend [Prince] — someone who cares about your career, and wants to see you go far and to push boundaries and shake up the world — give whatever they possibly can to the cause."

As for the bonus cuts, they include a pair of remixes and two other new tracks. Most notable of those songs is a redo of the title track featuring Big Boi and Cee Lo Green.

On top of all the song info, album art has been revealed as well. Showing a glitzy portrait of The Electric Lady herself, you can check it out up above. 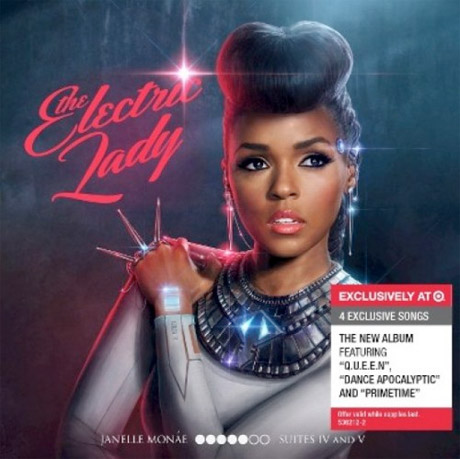