By Sarah Murphy
Published Sep 02, 2016
In addition to countless cat videos and clips documenting the horrible misuse of a McChicken, the internet has given us a wealth of insane conspiracy theories over the last 25 years. The latest one to catch our attention finds enthusiastic self-appointed detectives trying to uncover the myth of mysterious graffiti artist Banksy's real identity — and the results should be of interest to Massive Attack fans.

Investigative journalist Craig Williams is claiming that Banksy's true identity is none other than that of the UK trip-hop group's Robert "3D" Del Naja.

Piecing together a timeline and map that compares Massive Attack's touring schedule with the dates and locations that Banksy originals appeared [via The Daily Mail], he deduced that on at least six different occasions, more than a dozen Banksy murals have appeared in cities around the same time Massive Attack were scheduled to play those same places. 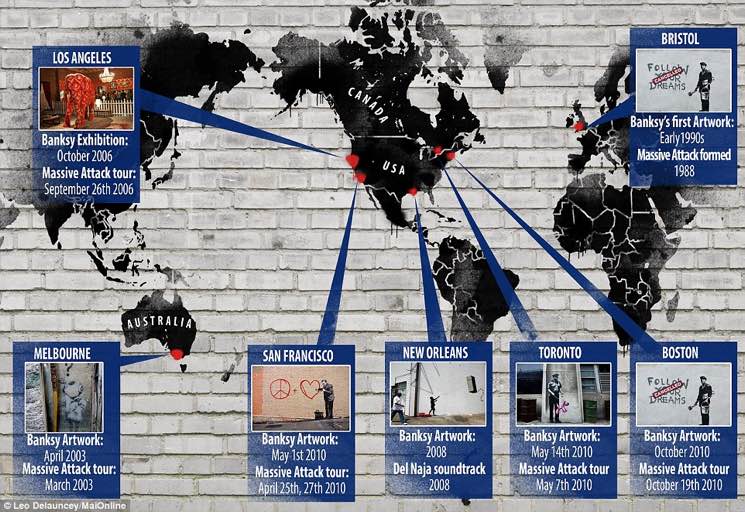 Massive Attack formed in Bristol, UK in 1988 and Banksy's first artwork surfaced in 1990 in the same city. After Massive Attack played Melbourne, Australia in March 2003, a Banksy original appeared a month later. A similar pattern revealed itself in Los Angeles in 2006 and New Orleans in 2008 (this time in conjunction with Del Naja's Trouble the Water film score), with another string of murals popping up in San Francisco, Toronto and Boston over the course of 2010.

Del Naja has previously made it known that he was a graffiti artist in the '80s and has admitted to being friends with the elusive artist, even appearing in the acclaimed 2010 documentary Exit Through the Gift Shop. Banksy, meanwhile, provided the foreward to last year's book about the band, 3D and the Art of Massive Attack.

It's worth noting that Williams claims that Banksy is likely a collective of artists headed by Naja, working and travelling in cahoots with each other. He has also predicted that a new Banksy work will be unveiled around the same time as the band's upcoming homecoming gig in Bristol tomorrow (September 3).

Until now, the most widely believed theory has tapped British artist Robin Gunningham as the real brains behind Banksy.

As we wait to see if Williams' prediction comes true, relive Massive Attack's recently unveiled Cate Blanchett-starring video for "The Spoils" below.