The Future Is Now: How to Celebrate 'Back to the Future' Day

By Gregory Adams
Published Oct 21, 2015
Following years of Photoshop con jobs causing a lot of fan confusion over Facebook, today (October 21) finally marks the day Marty McFly (a.k.a. Michael J. Fox) "travelled to the future" in the iconic second instalment of the Back to the Future film series. And damned if we don't want to celebrate!

Truth be told, not all of the Robert Zemeckis-directed classic's predictions came true, as we're still over a dozen sequels away from being bitten by a holographic Jaws 19 advert, and we're still rolling our rubber-tired cars down the street like suckers, but there's plenty to do today to get in the spirit.

From grabbing a ride in a real-deal DeLorean to putting in an order for a new fancy vinyl box set of Alan Silvestri's iconic score, here are a few Back to the Future-modelled plans for fans to consider today, which has appropriately been crowned Back to the Future Day. After all, the future is now!

Grab yourself that USA Today about McFly Jr.'s arrest 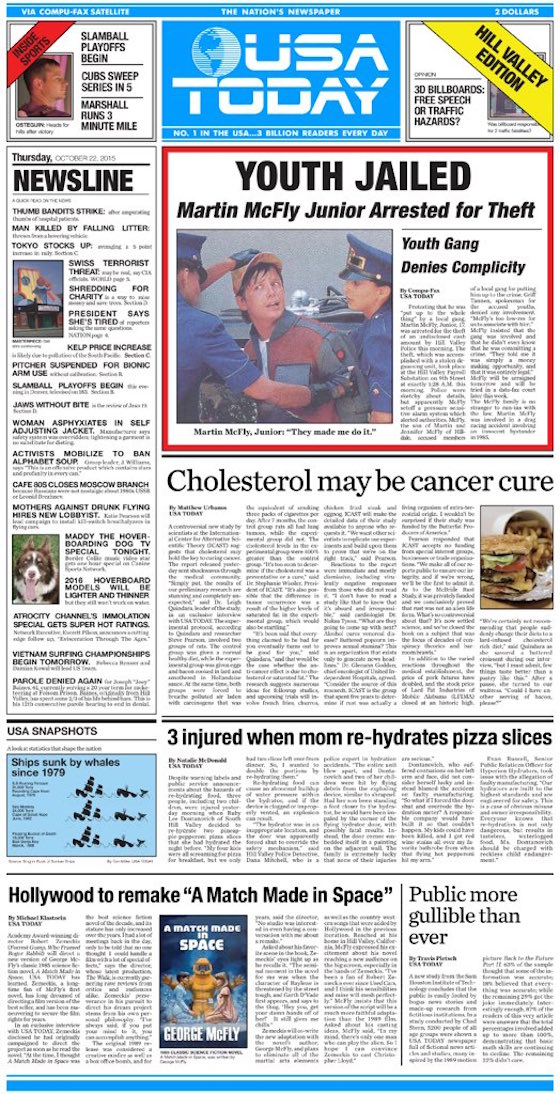 The time-travelling caper offered plenty of mix-ups once McFly landed his DeLorean, with one of the future grievances being his son (a sleeve-tugging doofus also played by Fox) ending up in jail following a robbery plot. This was the cover story to the next day's (October 22) USA Today.

Amazingly, the still-in-print publication is honouring the incident by offering up a themed wrap-around cover to tomorrow's paper, which indeed trounces the McFly's good name with the headline "Youth Jailed." It also teases stories on Slamball, and the cancer-battling properties of cholesterol. Though it officially hits stands tomorrow, you can start lining up at your local newsstand now... or just look at the pic on your smartphone.

Book a ride in a DeLorean through Uber 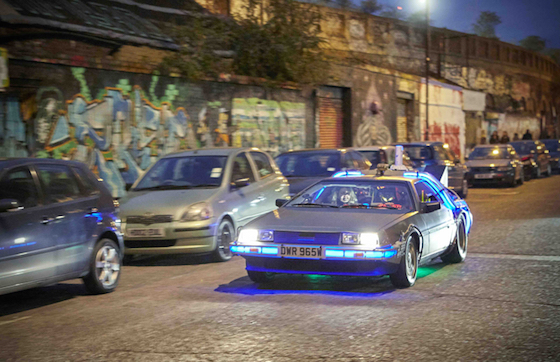 Even more iconic than McFly's puffy vest or Doc's frizzy hair is the flipped-up door scheme of their beloved silver DeLorean. While chances are you'll not be finding a plutonium-guzzling version of the vintage car anytime soon, Uber users in London have been teased with the prospect of catching a ride in the pavement-scorching time whip.

As Timeout reports, Uber and Pepsi Max have teamed up for a promotion offering free DeLorean rides. That said, either the offer is a gag or just too damn popular to comprehend, as app users are apparently being faced with the disappointing message "all cars are currently in the future." 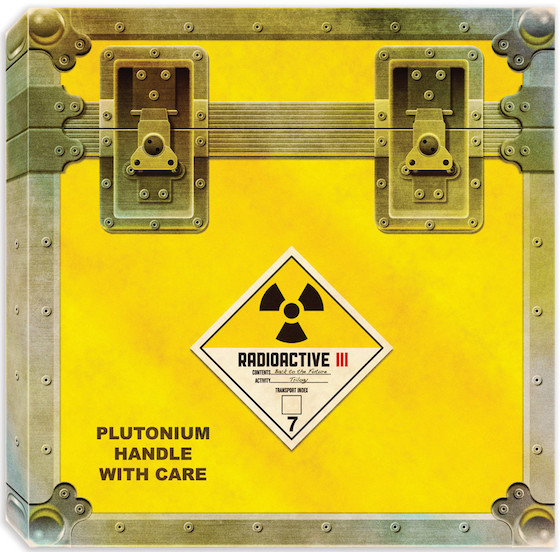 Movie music specialists Mondo have long been teasing a soundtrack release behind the Back to the Future series, and it fittingly goes up for sale today. A deluxe edition features three separate slabs of vinyl showcasing composer Alan Silvestri's iconic scores to each film in the Back to the Future trilogy crammed into a hardshell apparently once used by Doc to transport plutonium.

As you might expect from the company, it also features new, exclusive artwork from Matt Taylor, who was inspired by various guitar-slinging, time-bending, and horse-riding scenes from the movies. You can order a copy over here.

Tune in and watch the Cubs make a comeback 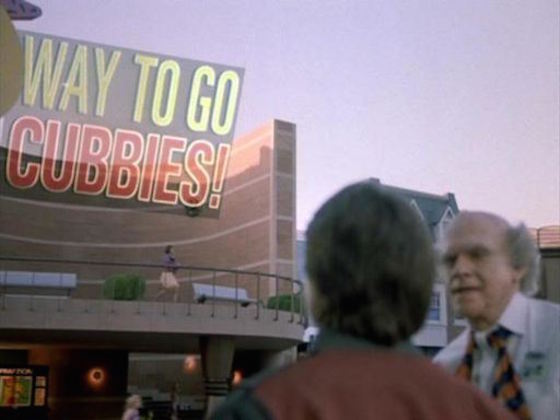 One of the biggest plot points of Back to the Future II is how Biff Tannen yanked a sports almanac from the future and brought it back to the past to make some serious bank. One of the events he bet on was the 2015 World Series, which the Cubs had won. Considering the Cubs' long-documented disappointments over the years, it was a bit of a throwaway joke at the expense of Wrigley Field.

Fast forward to 2015, and the Cubs are actually in the playoffs. They're currently battling the New York Mets in the National League Championship, though they're currently down 3-0. With game four on the line tonight, Cubs fans, not to mention Biff Tannen, are hoping their boys can make a comeback.

Visit Hill Valley, while you can 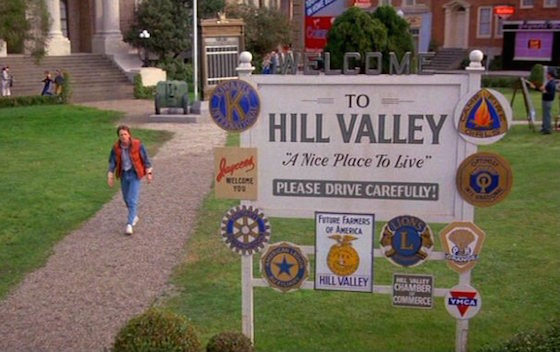 Though McFly's hometown of Hill Valley, CA, is completely fictional, there are a handful of locales around North America saluting the film character's stomping grounds for the day. As the Globe and Mail reports, the town of Reston, VA, has officially rebranded itself as "Hill Valley," while tomorrow will have residents of Fillmore, CA, unveiling a recreation of Hill Valley. If you're a dead ringer for Michael J. Fox, may we suggest hitting the "Million McFly March" in Burbank, CA, where a group of clones will converge upon a Burger King that was used in the film series. 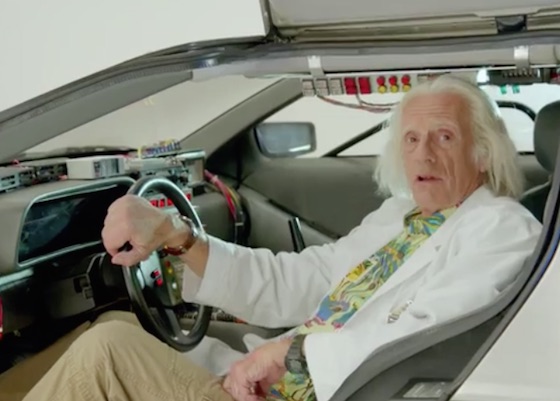 Great Scott! Despite all the timestream distorting he's accomplished over the years, it seems that Doc hasn't forgotten what day it is either. The scientist (or, if you will, actor Christopher Lloyd) has just delivered a message: it's time to enjoy the future with a newly purchased Back to the Future series Blu-ray box set.

He says: "The future has finally arrived. Yes, it's different than we'd all thought, but don't worry! It just means your future hasn't been written yet. No one's has. Your future is whatever you make it, so make it a good one." 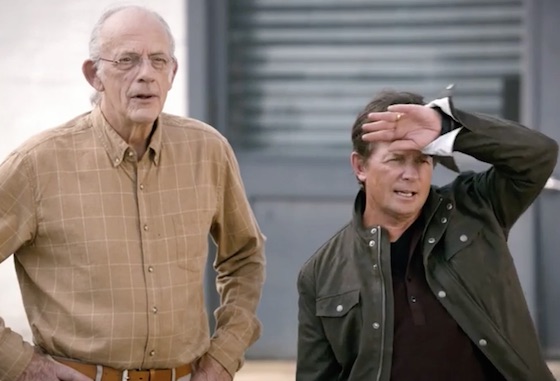 Oh, the timestream. It offers up so many weird possibilities. In addition to Doc's home video-geared communique, out-of-costume and IRL versions of Lloyd and Fox have also got together to talk a bit about the old movie. Oddly, the clip is sponsored not by DeLorean but by Toyota. But, to be fair, the DMC-12 hasns't been in production since 1983, two years before the first Back to the Future movie hit screens.

As you'll see below, they discuss the past and present, what it's like to own a fax machine, and how it's conceivable to use trash as fuel for your car. They also plug the Toyota Mirai.