By Gregory Adams
Published Nov 30, 2015
Most album covers are fairly innocuous and forgettable, whether playing out as a simple headshot for an R&B artist or a "boundary-pushing" metal jacket with a gruesome illustration and an undecipherable, scribbly band logo.

There's no real rhyme or reason as to why some cover art sticks in our psyche, but below, we've collected a handful of the rankest offerings that haunted store shelves and computer screens throughout 2015. Some were faux-artsy aberrations, while others were meme-ready expressions in minimalism. As you'll see, a few made the list for less tasteful reasons. Feast your eyes on all of them below.

To find more of Exclaim!'s year-end writing, head to our 2015 in Lists section. 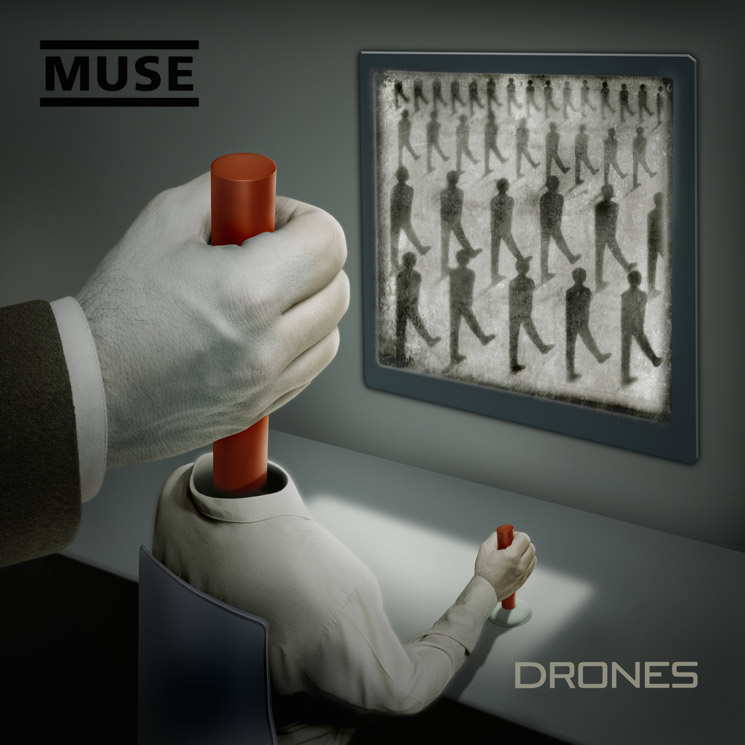 Look, we get it, Muse. You're a highly political rock band. You're smart. Check that Drones cover art, which ponders: Who is really in control? A god-like hand controls the joystick head of a figure controlling a brigade of — you guessed it — drones.

A twist on Juvenal's profundity? Perhaps. A comment on societal structure and the true nature of power? Sure. But the blunt, heavy-handed force of the image is ultimately too goofy to bring it beyond the level of a conspiracy theorist's coffee shop philosophy session. 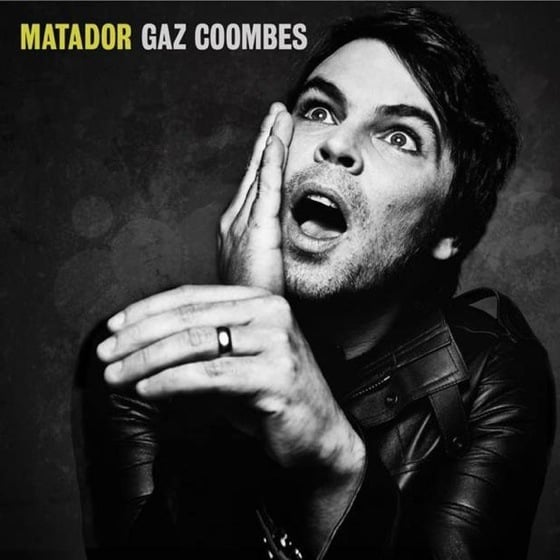 As if sitting in a Sears portrait studio and asking "Give me the Macaulay Culkin," there's a falsified look of shock and awe in the eyes of former Supergrass frontman Gaz Coombes on his latest solo LP, Matador, which is accentuated by an obnoxious palm smack to a hollow cheek. His mouth hangs slack-jawed in faux incredulousness, forever calling out, "Oh, no you didn't!"

Black, white and a splash of yellow figure into the artwork, but toss this Matador into the ring and the bulls will be seeing red in no time. 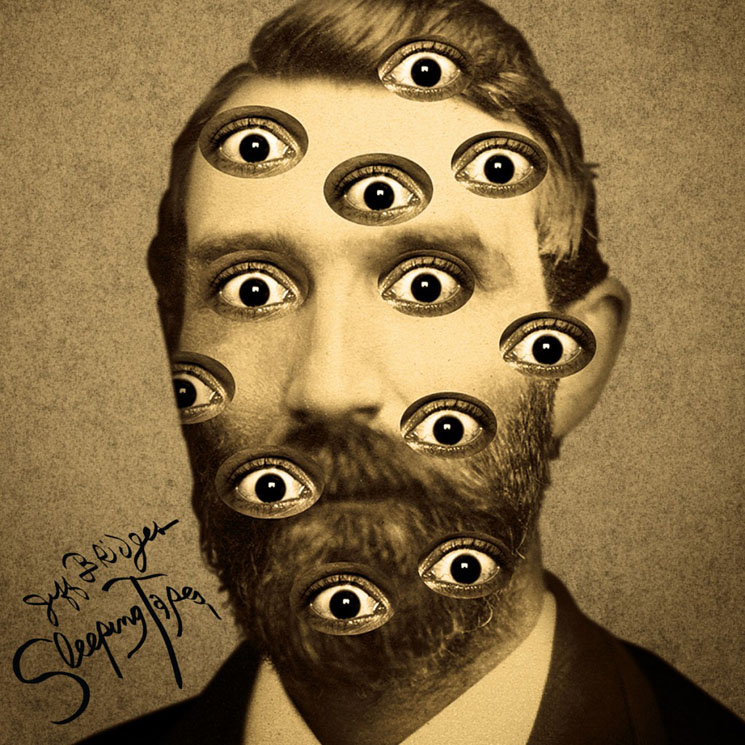 Jeff "The Dude" Bridges really blew our minds this year with Sleeping Tapes, his conceptual collection of meditative Oms and wandering tales about going to the bathroom at night. All in all, the sound of his paternal, gravelly voice, mixed together with various chimes and ambient tones made for a perfect nocturnal soundscape. Less likely to usher us toward the Land of Nod? The straight-up terrifying piece of artwork he blessed the set with.

First off, the sepia-toned nightmare stars a bearded figure giving us the business with his overly caffeinated, bug-eyed stare. Add to that the haphazardly cut-and-pasted eyeballs bursting out of his chin whiskers, and you've got yourself years of sleepless nights to cope with. Though arguably as weird as the material contained within, it's a pretty jarring and disjointed image for what's supposed to be a sleep aid. 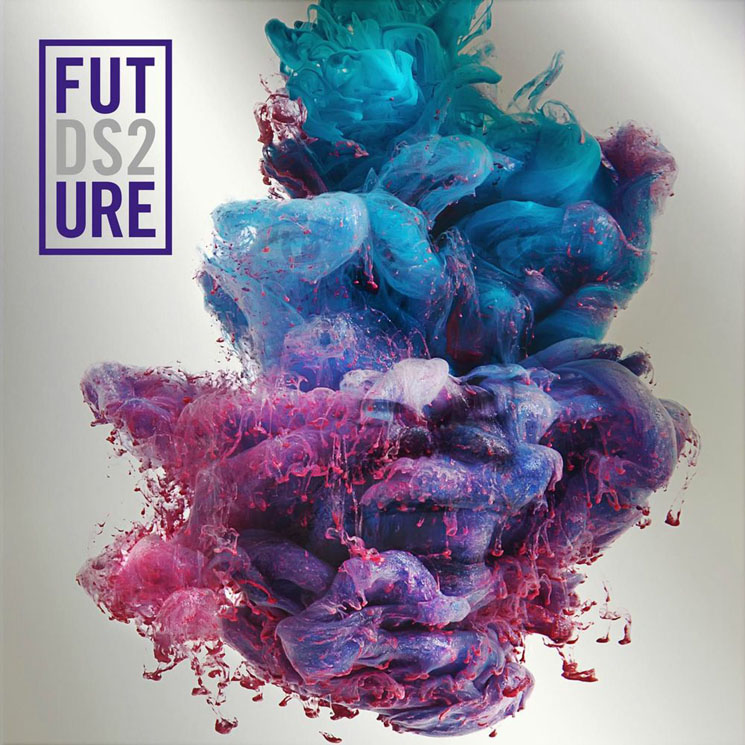 Future had a massive year, issuing several mixtapes throughout 2015. Each managed to convey a different feel with their artwork: his Beast Mode release with Zaytoven, for instance, reflects an on-the-attack rapper via a hand gripping both a microphone and a bloody heart; his What a Time to Be Alive collaboration with Drake was adorned in shimmering jewels, reflecting the pomp of tag-team tunes like "Diamond Dancing."

His syrup-saluting DS2, meanwhile, placed our eyes on an unsettling purp-and-turquoise swirl of textures. It may be highlighting the hypnagogic feel of downing a heaping cup of Dirty Sprite, but it's not too pleasant to look at it. Exclaim! Senior Online Editor Josiah Hughes may have said it best: "The Future cover looks like someone ate a bunch of Nerds and cotton candy, then had diarrhea." 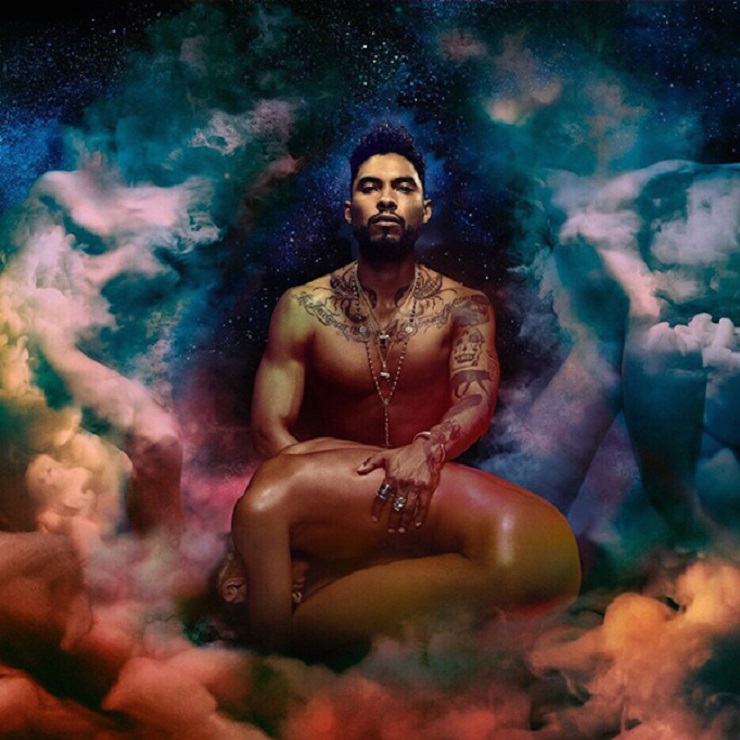 While the album itself is a wildly adventurous exploration of R&B sounds and raw sexuality, there's something clunky and clinical about the skin-bearing artwork to Miguel's Wildheart. While the purple and pink clouds surrounding a space-set Mig are mind-blowing in themselves — each containing a misty nude — there's something disconcerting about the singer's own stony stare as he caresses the ribs of his fetal position-favouring lover.

Though it may be intending to highlight his sensual powers, it just looks like he's consoling her after an exhaustive, post-bar binge barf-a-rama. That, or using her as a table.


5. Drake
If You're Reading This It's Too Late

One of the most fascinating things about Drake's smash mixtape/not-mixtape is how seemingly uninspired and lazy the cover art is. At face value, it's just a sloppily scrawled piece of penmanship, possibly sketched out drunkenly on a bar napkin, or maybe written hastily after accidentally sleeping on your good hand. It's, frankly, terrible, but somehow, it managed to capture our imagination.

Just try to remember the flurry of parodies that flooded your Instagram and Facebook feeds, whether personalized between friends or adapted to playoff runs. People went wild with it, with the image hitting its peak with a very meta: "If you're contributing to this meme it's too late." 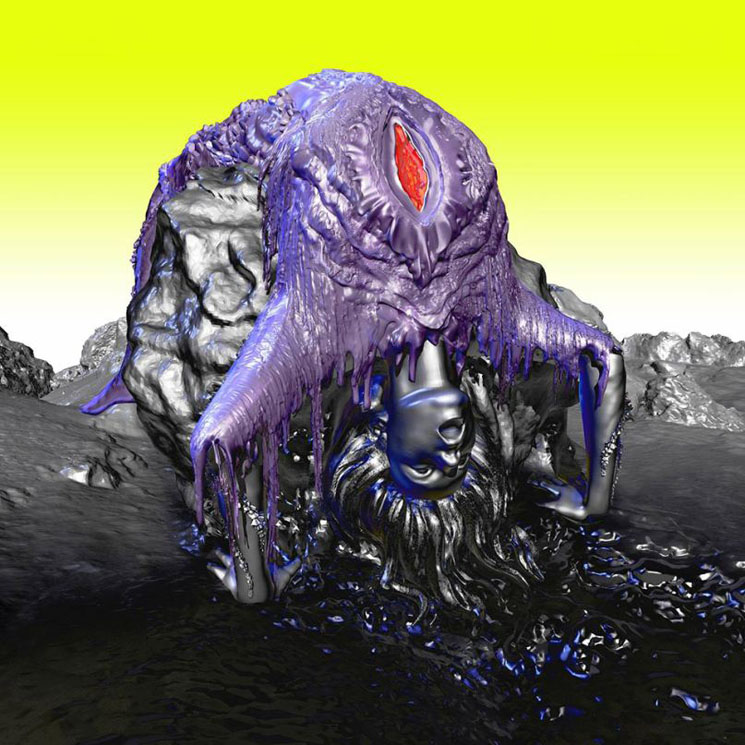 There are two covers to Icelandic artist Björk's latest album, Vulnicura. One finds an inky figure with a gaping chest wound covered in a plethora of lights. It's kind of weird, but nothing compared to the vinyl version, which finds an uncomfortably back-broken Björk, preserved in Han Solo-style carbonite, tossed across a boulder in a neon desert.

Here, the slit is more eye-catching and yonic, leading one to contemplate the meaning of life. Or, failing that, a reasonable payment plan option for therapy.

3. Du Blonde
Welcome Back to Milk 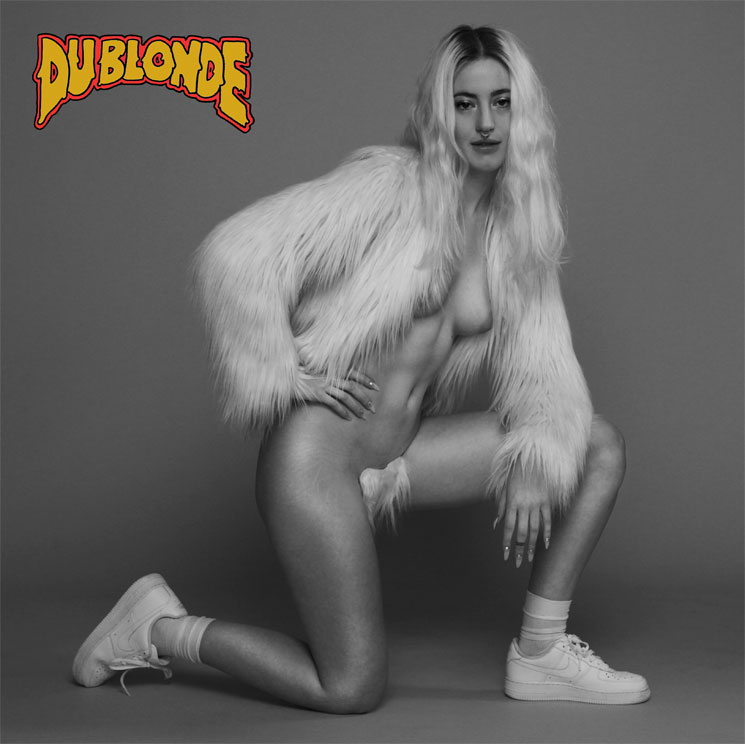 On this debut album from UK artist Du Blonde, not only does the carpet match the drapes, but it also pairs nicely with the musician's sneakers and mohair jacket. 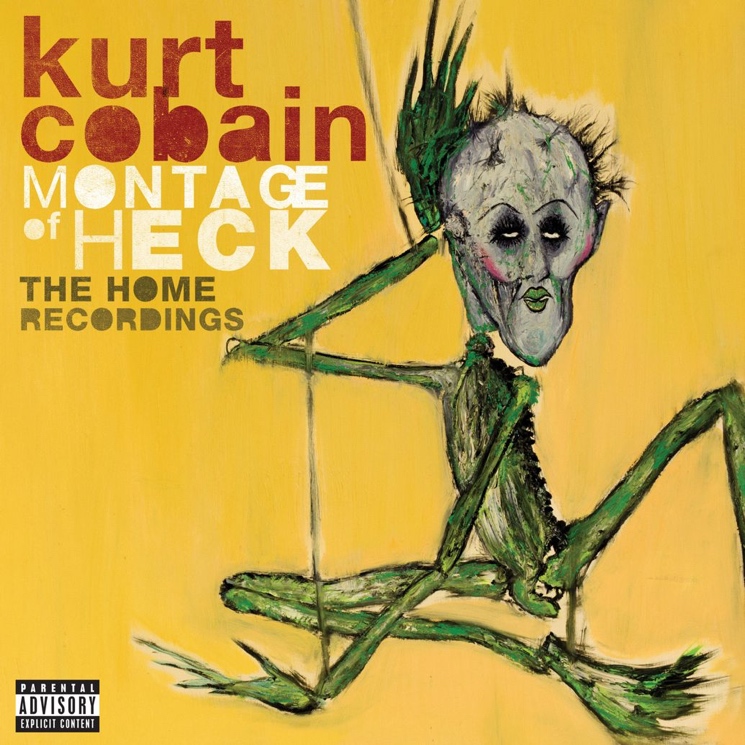 Just as the soundtrack to Brett Morgen's Montage of Heck documentary offered up an underwhelming clutch of half-executed demos ("Scoff") and listless spoken word pieces, the odds-and-ends set came packaged with some bottom-of-the-heap artwork unmercifully dug out of the late Kurt Cobain's archives.

The cover to Nirvana's early rarities set Incesticide featured a haunting but gorgeous mixed-media piece from Cobain that juxtaposed a stone-faced and aloof alien and a smashed-porcelain cherub with the full-bloom beauty of a flower. Seemingly both a tribute to and trashing of those aesthetics, the deluxe edition of Montage of Heck puts on display a slap-dash '90s sensibility of textual activity alongside a Cobain painting of a grotesque and pouty amphibian Kewpie doll. It taunts us with its empty eyes to open Pandora's box, but bless the Nirvana devotees that managed to "Stay Away" from this utterly empty cash-grab. 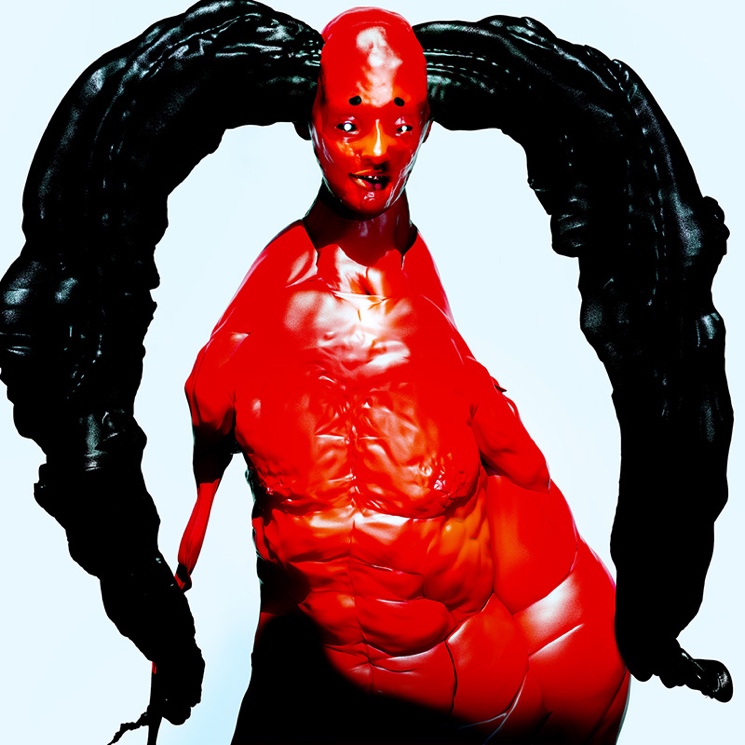 Ever wondered what it would look like if Tim Curry's devilish Darkness character from Legend and The Fifth Element's Diva had a baby, and then she grew up on a diet consisting solely of hot air balloons? That's Arca's Mutant cover.

Or what about that dream where your liver jumps out of your mouth, becomes fully sentient, grows goat horns and just proceeds to freak everybody the fuck out at your birthday party? That's Arca's Mutant cover, too.

The worst part? It's smiling.