By Megan LaPierre
Published Oct 21, 2021
The ever-humble Cardi B is feeling a little starstruck after a clip of actor Penn Badgley (currently starring as Joe Goldberg in the Netflix series You) singing the praises of her "authenticity" on social media has been circulating on — you guessed it — social media. (Twitter, to be specific.)

Seeing the interview snippet making the rounds on her timeline over the weekend, the rapper couldn't contain her shock and awe.

"OOOOMMFFFGGGGGG HE KNOWS ME !!!😱😱😱😱😱😱😱😱OMMMGGGG!!!!!!Yoooo like I'm famous famous," she wrote, quote-tweeting the video of Badgley (alongside Canadian co-star Shay Mitchell, who plays Peach Salinger on You).


The video was taken from an event in the Philippines a couple of years ago, where the actor discussed his serial killer character's use of social media for stalking his victims.

"I think Joe reveals the unsettling logic that a lot of us are following in the worst way socially," Badgley said. "But I think — in the best way — it's a tool and there's nothing inherently wrong with that tool at all. When I try to do something on social media, it's pathetic."

I really appreciate people who have this totally second nature relationship to it, because that's when you have something meaningful and substantive to post; then I think it really comes through and people appreciate it all the more. Cardi B is a great example of that — she has such an authentic relationship [to social media]. To me, [her accounts are] this incredibly nuanced place to be and despite what many might judge as antics, I feel she has an incredibly authentic relationship to that. And I think that's why people like her so much.

Badgley has certainly revealed himself to be among her most dedicated stans. He returned the rapper's retweet sentiment on Tuesday (October 19) by quoting her post and simply adding "I-" to show his surprise.


Understandable, given the fact that it feels impossible for someone to have not heard of Cardi B at this point ("WAP," anybody?). But it's sweet that she's still shocked that someone like Badgley would know who she is, let alone be such a big fan of hers.

Please also note that the two have since changed their Twitter icons to photos of each other, which is pretty adorable — and Cardi's bio reads even better next to this photo of Badgley.

No matter where this blossoming social media friendship goes, the screenshots of their icon switcheroo will live forever below. 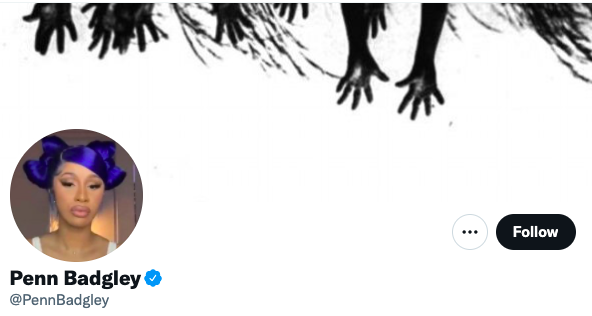 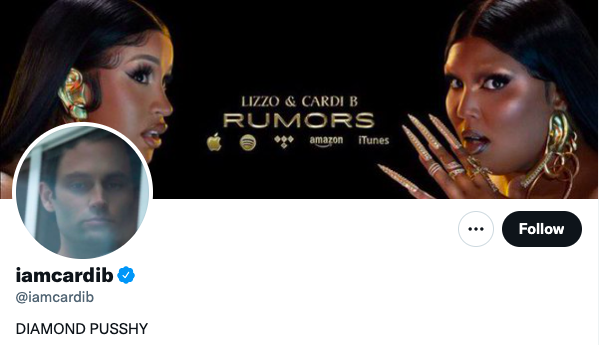