By Brock Thiessen
Published Mar 11, 2017
While fans were no doubt stoked when Pearl Jam were announced as one of 2017's Rock and Roll Hall of Fame inductees, the same can't be said of all the band's members, especially those no longer in the group. Former Pearl Jam drummer Dave Abbruzzese was very publicly upset when he was not named as one of the members being inducted — an issue the band have now finally addressed.

Pearl Jam took to their Facebook this morning (March 11) to pen an open letter addressing the controversy, stating that all the band's former drummers, including Abbruzzese, are invited to attend the Rock and Roll Hall of Fame ceremony.

Here's a bit of what they had to say:

While awards and accolades are understandably subjective and a countless number of our peers have yet to be honored, we do feel fortunate to be recognized and provided the opportunity to reunite with everyone who has been part of the group. Specifically, the drummers who left their distinctive mark on our band in the pre-Matt Cameron years. Dave Krusen, Matt Chamberlain, Dave Abbruzzese, and Jack Irons are each individually great players who gave their all to the early recordings and live gigs. Looking forward to seeing them and all the other musicians on the bill.

However, while all these former drummers have been invited to attend the ceremony, they will not actually be inducted into the Rock and Roll Hall of Fame alongside vocalist Eddie Vedder, bassist Jeff Ament, guitarists Stone Gossard and Mike McCready, current drummer Matt Cameron and founding drummer Dave Krusen.

Pearl Jam will be inducted into the Rock and Roll Hall of Fame alongside Journey, Joan Baez, ELO, Yes and Tupac Shakur at the Barclays Center in Brooklyn on April 7.

You can read Pearl Jam's entire letter below. 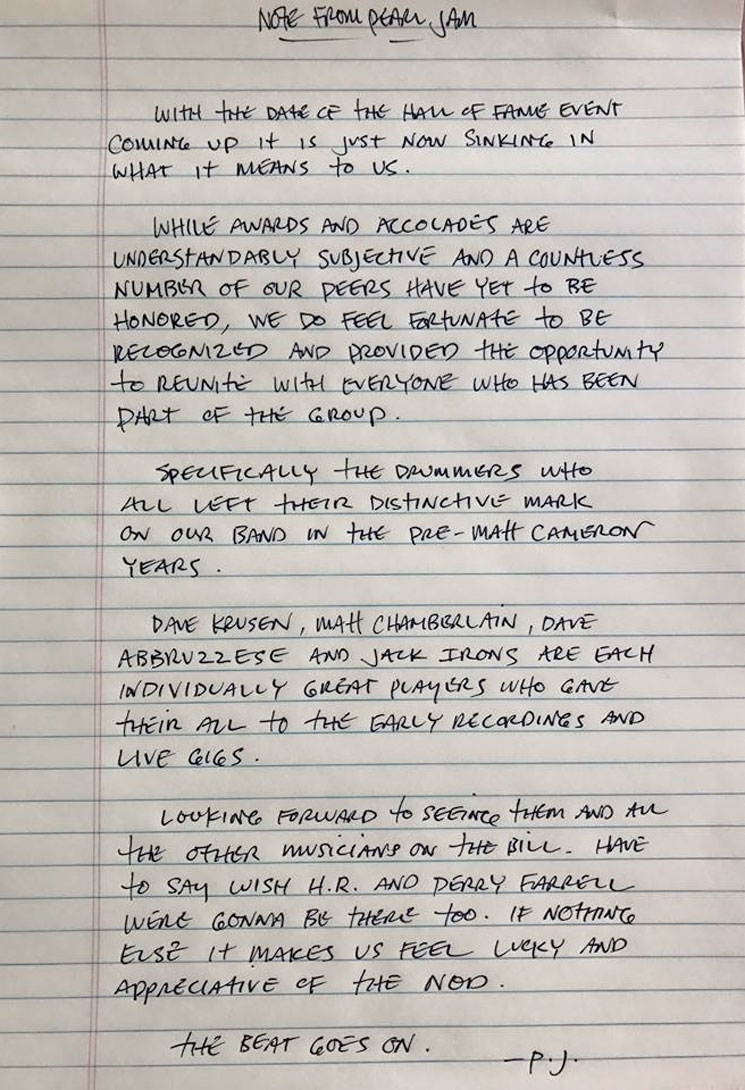