By Gregory Adams
Published Sep 02, 2014
Japanese post-rock veterans Mono came out to North America last year to record a new LP, but it turns out the band had much more music in them than we had initially thought. As such, they'll be issuing two full-lengths in tandem this fall.

Both The Last Dawn and Rays of Darkness land October 28 through Temporary Residence Ltd. The records were tracked simultaneously, with both said to explore themes of "hope and hopelessness, love and loss, immense joy and unspeakable pain."

The Last Dawn apparently plays out as the "lighter" of the two efforts, with its six pieces said to pull influence from film scores and shoegaze. While the outfit have flirted with orchestral strings over the last few years, The Last Dawn is said to have toned down those sounds in favour of a more streamlined approach. Also noticeable is that the album has the band using more trim arrangements, fitting itself onto a single LP.

You can check out the smoldering, saturated six-strings and crashing drums of "Where We Begin" down below.

Rays of Darkness, meanwhile, completely abandons stringed instruments, being the first LP from the band in 15 years to do so. While a preview from the collection has yet to appear, the second of the two upcoming records is, as the title hints, reportedly the darker of the pair. In addition to the members of Mono supplying "scorched riffs [and] doom rhythms," the four-song release includes a guest appearance from Envy's Tetsu Fukagawa.

You'll find all of the tracklisting info down below. The cover art to The Last Dawn is above, while that of Rays of Darkness can be seen at the bottom of the page.

1. Recoil, Ignite
2. Surrender
3. The Hand That Holds the Truth
4. The Last Rays 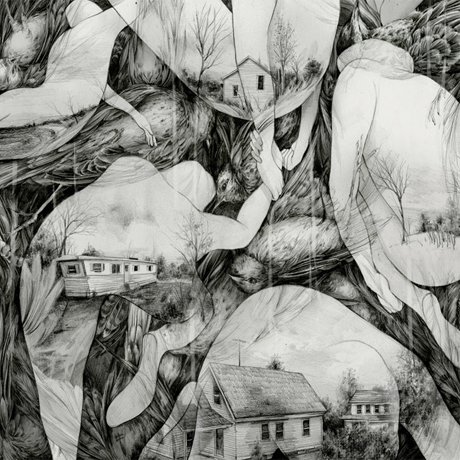