Half of the People Who Buy Vinyl Records Don't Actually Listen to Them, Study Finds

By Josiah Hughes
Published Apr 15, 2016
The vinyl revival continues to be a strange and enduring craze. On the one hand, there are new high-definition records in development. Meanwhile, old-school record nerds and trend-hopping newcomers are battling it out to determine whether the word "vinyls" is acceptable. All of this for a format that, it turns out, isn't even being listened to all that much.

The BBC recently pointed to an ICM poll that surveyed vinyl buyers to determine their listening habits. Half of them said they purchased a record after first streaming it online.

That said, of the people polled, 48 percent admitted to purchasing vinyl records without ever actually listening to them. Further, seven percent of those polled said they didn't even own a turntable.

Jordan Katende, a student in Manchester, gave the sort of quote that will haunt crusty old collectors in their dreams: "I have vinyls in my room but it's more for decor. I don't actually play them.... It gives me the old-school vibe. That's what vinyl's all about."

With Record Store Day set to take over independent shops tomorrow (April 16), there will be plenty of opportunities for students to pick up some vinyls and give their room that funky retro feel. Further, if they actually bother putting the records on, they can get lost in the warm, vintage crackles. After all, vinyls just sound better. 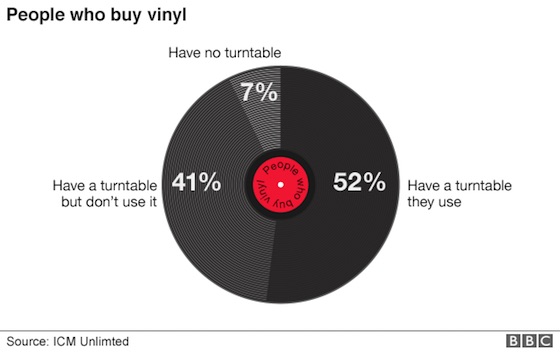