By Cam Lindsay
Published Oct 19, 2015
The last time Claire Boucher released a Grimes album, she was still considered a rising artist coming up in the ranks of Montreal's fertile DIY scene. That was almost four years ago, and a lot has happened to the BC native since then outside of releasing music. But finally, we will be getting new music soon, as well as a tour. While Grimes says the album will drop imminently, she doesn't consider it a "surprise release" in the same manner as Beyoncé and Miley Cyrus. But there was a reason for holding off on rolling out promotion for the yet-to-be-named album.

"The main reason I wanted to not give an exact release date is because when you announce an album then there's three months before you put it out," Boucher tells Exclaim! "And then when you put it out you don't care anymore. We actually just finished mastering the album. I just want the flexibility to be working on it until the last minute because that's my vibe."

Boucher understands it's been a long wait for her fourth official album, which she has been calling her first "proper" full-length. As reported last year, she already had enough material to release an album in 2014; however, it didn't live up to the high standards or the musical direction she has now set for herself.

"I could've put out an album a year ago, but it wouldn't have been the one I wanted to make," she admits. "I felt I could've done better. And then there was all of this pressure. Everyone was reminding me of the hype and saying, 'Don't fall for it!' So I just took my time and tried not to worry about it. I tried to make it really, really good."

With this album, Boucher finally feels she has proven herself as a producer. While Visions transformed her into a magazine cover star, gave her nearly 300,000 Twitter followers and caught the attention of Jay Z, who signed her to the management arm of Roc Nation, she feels that album represents the early stages of her career, when she was still learning how to become a musician and producer.

"Honestly, my first three albums were normally, for musicians, something most people wouldn't hear," Boucher says. "Like [2010's] Geidi Primes was the first music I ever made. So with those three albums, I think there is some beauty to the naïveté, but they are an example of someone trying to become a professional. I don't want to put too much cachet into professionalism. I'm definitely not about that. But Visions wasn't very finished. I made it in about two or three weeks. A lot of the songs I just made a beat for and then improvised some vocals over top.

"With this album I felt it was more important to actually write lyrics. I was hoping to take it to the next level with regards to skill and creativity. With each record I try and do something different, and with this one I wanted people to listen to it and say, 'Whoa, she totally improved her craft.' I think that was really important. It's like [Nine Inch Nails'] The Downward Spiral compared to Pretty Hate Machine. It's so incredible to be a fan of an artist that can take these huge creative leaps."

One thing the new album offers that we haven't heard before is the blatant sound of guitars. Grimes' music has always been confused for "synth-pop" or considered electronic (Visions took home a Juno for Electronic Album of the Year in 2013), but Boucher says time allowed her to learn how to play the instrument and even open new doors for her music. As a professed fan of acts like Nine Inch Nails, Smashing Pumpkins and Marilyn Manson, who have all integrated guitars and synthesizers, this shouldn't really come as a surprise. And the result, when you hear them, won't be as jarring as you might imagine.

"I think after Visions, I was trying to make new stuff using the same tools, and after a while, I wanted to shake it up a bit," she explains. "I didn't want to make another synth-pop record. But it was more about hanging out at my stepdad's house where he has all of these guitars and I was trying to learn how to play watching YouTube tutorials. It was pretty fun, and musically and melodically, it gave me a whole new realm of possibilities. There are lots of songs without guitar, but I was more excited by the songs with them. It felt more like a new world, which is why a lot of those made the new record. For me the guitar has always been kind of a mystery. I guess it's a pretty normal instrument, but for me it's a very foreign thing."

As previously reported, Grimes heads out on her "Rhinestone Cowgirls" tour later this week. You can check out all the dates below while we all sit patiently waiting for her new album to arrive.

UPDATE (10/19, 11 a.m.): Grimes has now shared the album art to her new record, which will be titled Art Angels. You can see it below. She also promises some new music and a video to arrive next week. 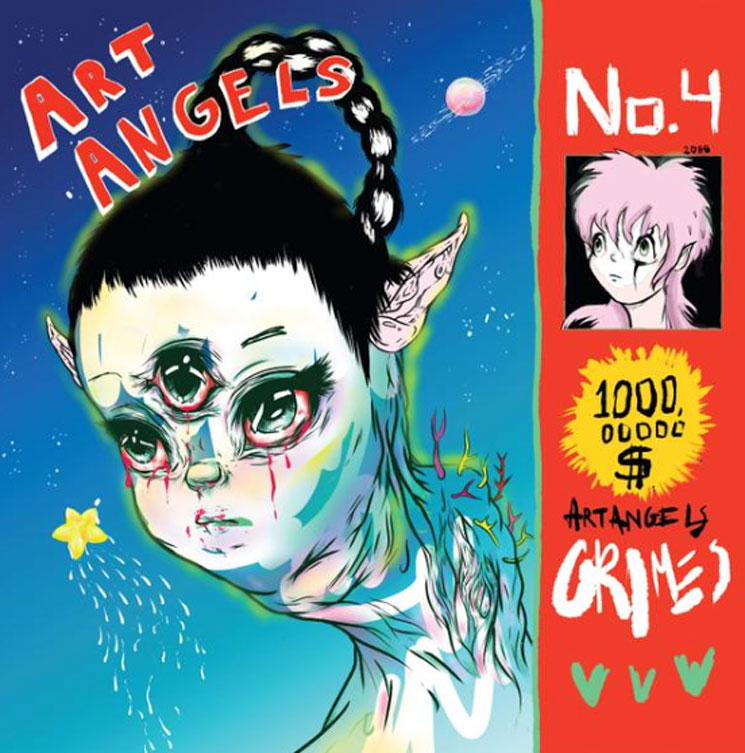