By Josiah Hughes
Published Aug 30, 2017
From ISIS to the alt-right, nefarious hate groups have been using all sorts of tools to recruit young people online. It's undoubtedly a cause for alarm, as parents panic to make sure their offspring don't wind up being radicalized. That said, the panic may have gone too far with a batch of "warning signs" released from the Calgary police.

A post on the City of Calgary website offers plenty of helpful information to warn people about the ways in which hate groups congregate online. That said, things get a little reductive in the section entitled "Signs of a child being part of a hate group."

Of the many signs listed, the write-up suggests that young people "Playing loud, heavy music with violent lyrics" are part of a hate group.

It might boil down to semantics, as the police most likely meant racist neo-Nazi music rather than the latest gore-grind release. Either way, it ruffled the feathers of one Calgary parent.

"My son, he listens to heavy metal, and he's one of the nicest kids ever, but I tend to see him lumped into a group he doesn't belong in," Robert Riggs told Metro. "It's kind of gone the way of video games cause violence and things like that. It's not monkey see, monkey do. Kids see their parents go to work all time, and they don't suddenly get up and find a job at seven-years-old."

Corwin Odland, a spokesman for the Calgary police, defended the point to Metro. "We're not saying all people who listen to rock music are part of hate groups, but there tends to be a correlation — people who are involved with hate groups tend to be involved in that kind of music," he said, adding that the point should be read in the full context of the list rather than on its own.

It's true that, when taken out of context, certain points on the list are common to plenty of young people. "Over hostility," "sudden lack of interest in school" and "changing their appearance" merely drum up images of a standard Hot Topic teen. 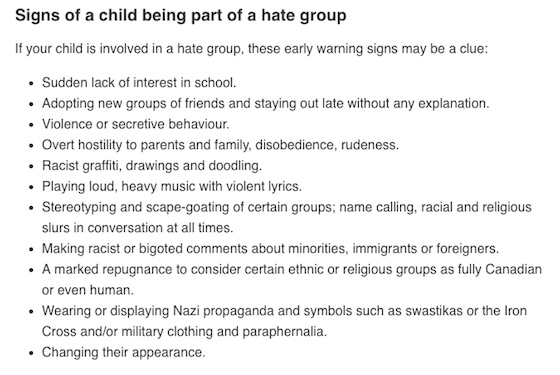