By Exclaim! Staff
Published Mar 17, 2017
We noted last week that there's a new feature on Exclaim! lately: Charts, up there between Concerts and the Trending 21. With a little help from our friends at BuzzAngle, you can now find — and customize — Canadian sales and streaming data for albums, artists and songs.

In the ongoing interest of keeping track of what's going on in the Canadian market, we've taken this week's (March 10 to 15) data for Canada's Top Albums (referred to by BuzzAngle as "Album Projects"*) and analyzed it to see what's going on. Here's what we found. 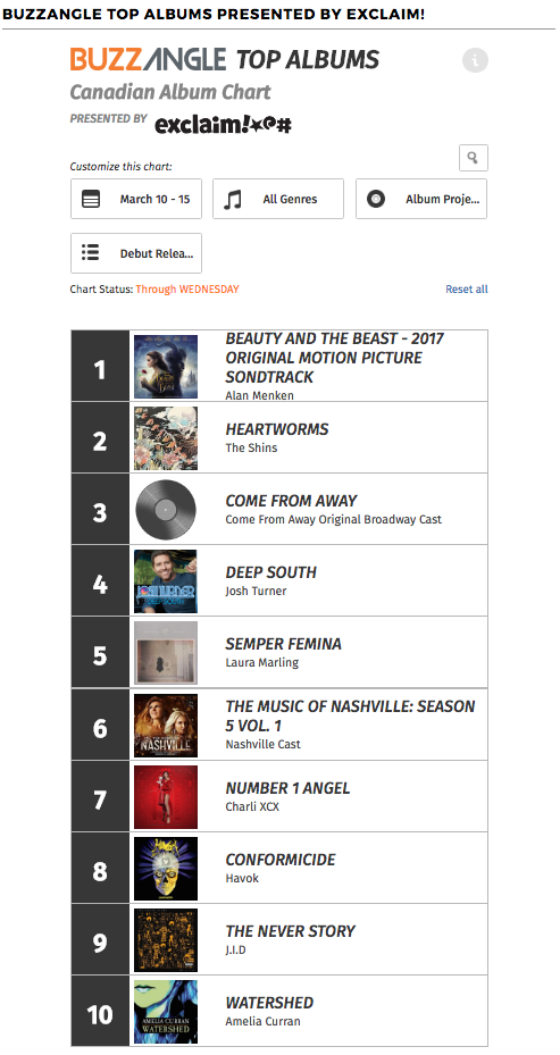 Up above, you'll see a chart of the data for the top ten albums that came out this week. As it turns out, Canadians really flocked to Beauty and the Beast — and then went home and streamed the heck out of the new soundtrack, despite the fact we felt that "the songs fall short amidst classics as delightful as the 1991 originals." Nostalgia, it seems, is a powerful drug.

On that same stage musical tip, people were clearly very excited for the Original Broadway Cast Recording from Come From Away, a musical about the flights redirected to Gander, NL after the 9/11 attacks; it came up third.

In second place was the Shins' latest, Heartworms. Their 1000-plus purchases and streams show that the band are still changing people's lives, even a decade after doing the same to Zach Braff. Laura Marling's excellent Semper Femina and Charli XCX's latest, Number 1 Angel, also seem to have captured Canadians' attention in their first week out. Finally, we're happy to note that beloved Canadian songwriter Amelia Curran squeaked into the Top Ten with Watershed, an album that is by-turns darkly humorous and wonderfully poignant.

But those are just the new albums out this week; below, you'll find a chart of the most streamed and purchased albums overall, regardless of release date, for the week to date in Canada overall. Ed Sheeran continues to run things, while the Weeknd, Bruno Mars and Adele refuse to budge.

Stay tuned for next week to see if new albums Spoon's Hot Thoughts and Depeche Mode's Spirit crack the Top Ten, and in the meantime, keep an eye on the top BuzzAngle albums, artists and songs. 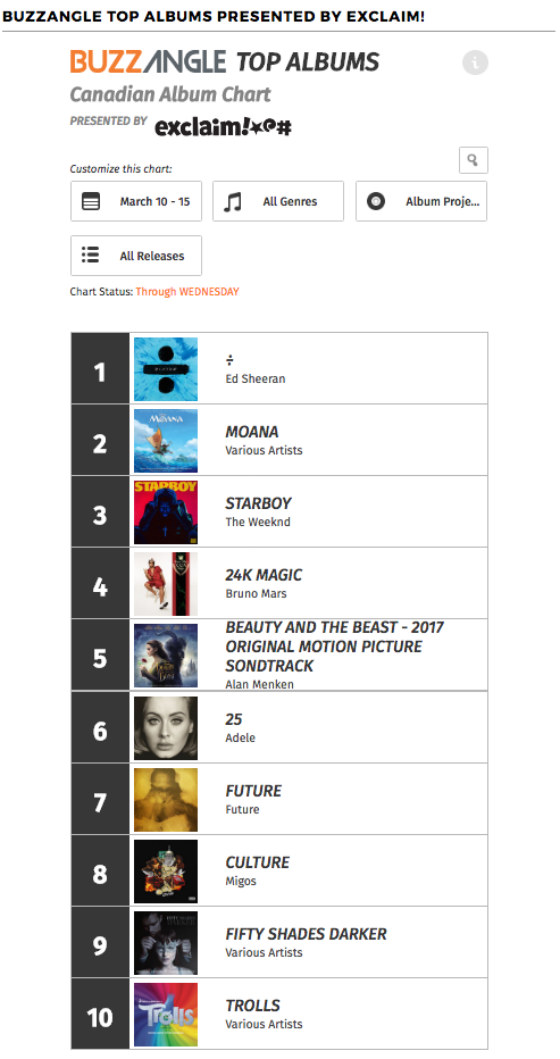