By Exclaim! Staff
Published Mar 10, 2017
You might have noticed a new feature on Exclaim! recently: Charts, up there on our homepage to the right between Concerts and the Trending 21. There, with help from our friends at BuzzAngle, you can now find up-to-date Canadian sales and streaming data for artists, albums and songs.

Perhaps best of all, you can customize it all to your heart's content. Want to know which hip-hop track dominated the streaming charts last week? Which vinyl LP outsold them all the week before Christmas? It's all at your fingertips there.

In the interest of keeping track of what's going on in the Canadian market, we've taken this week's data for Canadian "Album Projects" — that is, album sales both physical and digital, as well as song streams and sales that comprise a full album's worth of listening — and analyzed it to see what's going on. Here's what we found.

Down below, you'll see a chart of the data for the top ten Album Projects that came out this week (or, in BuzzAngle terms, "Debut Releases," as they debuted this week). Obviously, singing lawn gnome Ed Sheeran ran away with things; his new album, ÷, garnered a whopping 65,118 total sales and streams. Milquetoast move, Canada.

We're happier to report that the debut by up-and-comer Khalid pulled in over 1,500 sales and streams, a modest but successful week for a new artist. In our review of American Teen, we praised the "Southern sensibility" the Texas native brings into "his take on R&B and pop." Beloved Maritimer Jenn Grant's Paradise came third, while Grandaddy's long-awaited return — ironically titled Last Place — squeaked into the top ten. 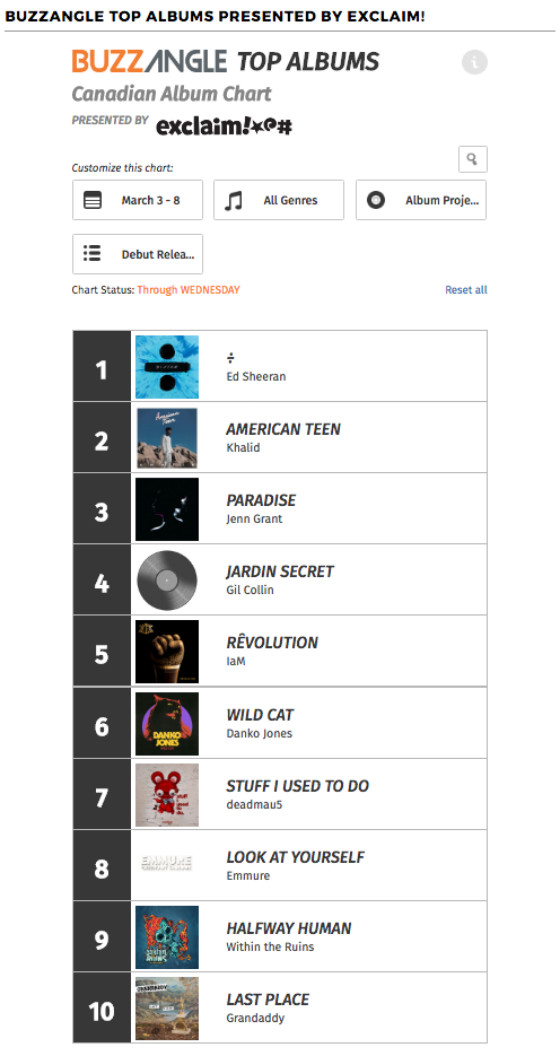 Of course, those are just the new albums. Below, find a chart of the most streamed and purchased albums for the week to date in Canada regardless of release date (which the Weeknd continues to dominate with his November 25 album, Starboy), and stay tuned next week for data on new albums by the Shins, Laura Marling, Tennis, the Magnetic Fields, Jacques Greene and more. 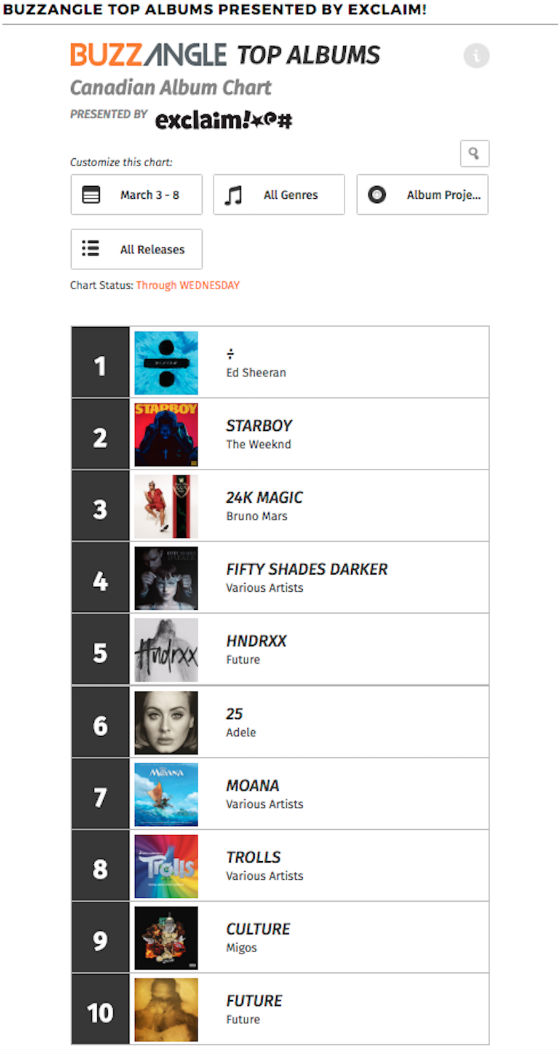