Here Are the Artists Who Were Awarded $4.41 Million by the BC Music Fund

By Brock Thiessen
Published Dec 01, 2016
Following the launch of the BC Music Fund earlier this year, the Province of British Columbia and Creative BC today (December 1) divvied out $4.41 million in funding as part of the $15 million project.

Among the first 35 successful applicants in the initial pilot program are such artists as Hey Ocean!, the Zolas, Mesa Luna, Jasper Sloan Yip, No Sinner, Dear Rouge, Said the Whale and Joshua Hyslop. The grant recipients were announced at the Alix Goolden Performance Hall in Victoria.

Down below, you can see the complete list of successful applicants and just how much money each was awarded. 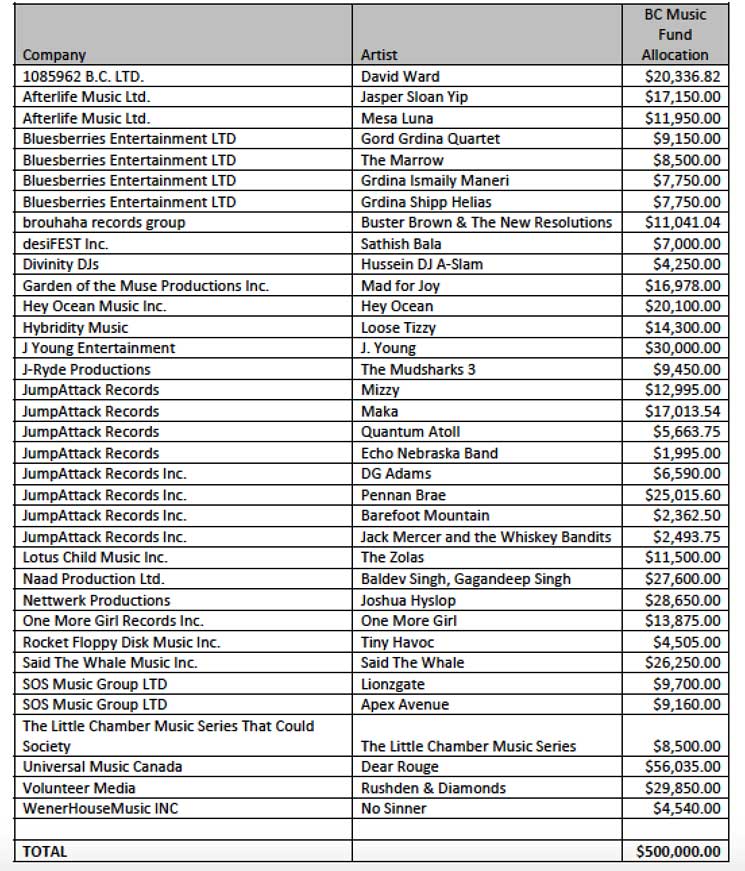 As previously reported, the BC Music Fund was launched in February with the aim of helping various sectors of the local music industry. The money is intended to go towards the recording arts, live performance, "music tour strategy" and "industry development."

As a stated by the program, the intent of the program is to "diversify BC's economy, stimulate foreign direct investment, enhance music tourism, stimulate the creation and retention of jobs and encourage increased activity in regional centres."

Following some criticism earlier this year regarding the BC Music Fund, Creative BC has also revised its Sound Recording Program, which launches today and allocates an addition $3 million. Under new guidelines, it intends to reflect an increased access for unincorporated recording studios and artists.

You can learn more about the program and how to apply here.