By Calum Slingerland
Published Dec 02, 2016
If you missed out on Guns N' Roses' "Not in This Lifetime" reunion tour, you may soon get another shot at seeing Axl, Slash and the gang. The band are already teasing further touring in 2017, and as several cryptic hints from the band seem to allude, it may just be a 30th anniversary tour celebrating their classic 1987 album Appetite for Destruction.

Guns N' Roses have been dropping hints primarily through their social media accounts these past few weeks. As Alternative Nation points out, a video uploaded to their YouTube channel reveals that "the machine is back at it in 2017," while a second one posted to Facebook preaches "Patience" for fans, playing off the song of the same name.

A fan in London also posted a picture of two posters to the band's Facebook page, with both showing two song titles — "Patience" and Appetite's "Welcome to the Jungle" — in the same typeface along with the hashtag #GnFnR. The same posters have also reportedly been spotted in Dublin.

Adding to all this, Alternative Nation reports that members of the band's Nightrain fanclub received a holiday email that included the message "Didn't get to see #GnFnR in 2016? Maybe 2017 will be good to ya… Keep your eyes and ears open!"

Appetite for Destruction was released in 1987 through Geffen Records to massive commercial success, having sold around 30 million copies worldwide.

You can find the band's teasers below as we wait to see what this all really means. 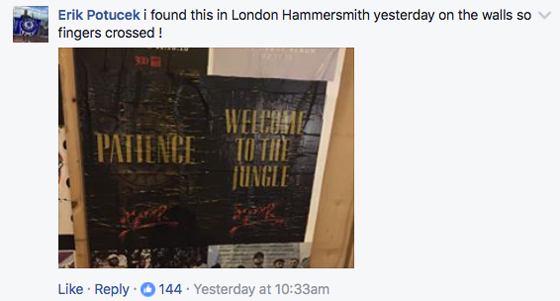