By Calum Slingerland
Published Sep 30, 2016
Rapper Freddie Gibbs has been acquitted of sexual assault in a case that had seen him detained in Europe since June of this year. Gibbs's lawyer Theodore Simon revealed that the MC was found not guilty of "sexual abuse of a defenseless or psychologically impaired person."

Gibbs was arrested in France earlier this year on accusations he had committed a rape in Austria in 2015. He was granted bail, but was extradited to Austria soon after.

As previously reported, the rapper had first claimed innocence when the case went public in June, with another lawyer named Michael Malka saying at the time that Gibbs "categorically denies the allegations made against him by Austria and is even very surprised that Austria is taking this on a year later, just as he is on tour in Europe."

Today, September 30, 2016, Freddie Gibbs was found not guilty. We have always maintained unconditionally and without any doubt that Freddie would be and now has been fully exonerated and completely vindicated. We are pleased and thankful that the Court recognized the same trust and confidence we and all of his fans have had in Freddie that justified and resulted in his absolute acquittal. Immediately after his acquittal I spoke with Freddie who expressed his deeply sincere, heartfelt gratitude and thanks to his fiancé Erica Dickerson for her unwavering support, for the steadfast and incomparable loyalty of his long time friend and manager Ben "Lambo" Lambert, for the extraordinary work and effort of his lawyers and for the overwhelming outpouring of love he has received from his fans. He says, "Thank you!"

While we are appreciative of the verdict of not guilty, nothing has changed. The actual facts have always demonstrated that Freddie was and is 100% innocent. It is now self-evident he was wrongly accused. The trial has confirmed our belief that after a searching and complete investigation and trial the true and actual facts would be revealed – that there always was an absence of any scientific, physical, or credible evidence that would warrant in any way such an accusation.

Freddie and his family look forward to returning to the States so he can resume his life and career.

Gibbs's manager and fiancée also took to social media to share the news.

The truth has come to light. Freddie has been acquitted of the false accusations. He's coming home a free man. Thank you to everyone who has been by our side these past 4 months, sending us good vibes, praying for us. Thank God. To new beginnings... 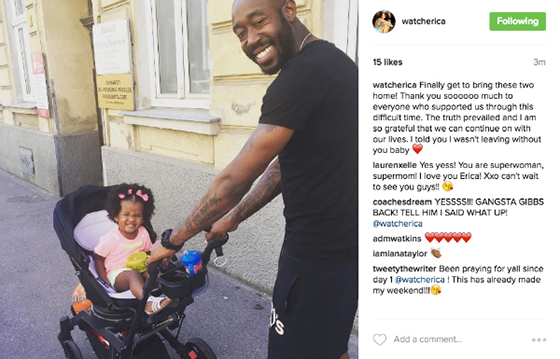 Now that Gibbs is returning home, it isn't unrealistic to think he'll be back to work on his next collaborative album with Madlib quite soon.