By Eric Hill
Published Mar 21, 2017
The earliest releases by Phil Elverum (who, at the time, was still spelling his last name as "Elvrum") firmly embraced the era of lo-fi recording and bedroom four-track exploration that spawned indie favourites like Lou Barlow, Smog and his much beloved Eric's Trip. His first experiments had the hint of trial and error baked in; Microphone Mix was the first of three cassettes that all saw the light of day when Elverum was in his late teens, and the tracks had titles like "Drums.Beats" and "4 Track Stuff."

Adopting the Microphones as a recording moniker, Elverum's love of Eric's Trip was fully on display in the handmade and collage approach he took to both recording and, especially, the artwork of debut full-length Don't Wake Me Up, released by K records in 1999. What might first have appeared scattered or sloppy in execution eventually revealed an artist developing a tone that embraced the juxtaposition of harmony and dissonance, the extension and/or subversion of how instruments typically interact with voice and each other and the use of non-musical sounds to give songs a deeper context in time and space.

Besides a simple change in name, the shift from the Microphones to Mount Eerie was also a shift in focus from the more personal point of view to something more universal and, at times, hermetic. In a Pitchfork interview, Elverum described Mount Eerie songs as "part of this one long chain, these songs about the idea of singing from the point of view of this dark, looming mountain shape." Indeed, these songs are grounded, sometimes metaphorically and literally, in the nature of Pacific Northwest. His birthplace of Anacortes, WA, population 16,000, remains his home and a strong touchstone. From this still point Elverum can draw in influences from Norwegian black metal to Angelo Badalamenti's scores for David Lynch films.

Process and memory, space and time, elements and emotions all have been continual references throughout Elverum's career. Besides more obvious and discrete albums, he's amassed tons of stray unreleased tracks that create bridges spanning the spaces between "official" releases. He's also indulged in the deconstruction and repurposing of elements from releases and has frequently revisited, remixed and re-released albums in an effort to better complete or expand his earlier vision. Over time, these examinations and re-examinations have fed into a kind of deeper folklore or mythology that surrounds and suffuses the recordings.

Mount Eerie releases A Crow Looked at Me this Friday, March 24, a stark, poignant album that confronts the recent and tragic passing of Elverum's wife Geneviève. A video for the song "Ravens" reveals a sparse conversational songwriting style that is an understandable departure from previous work, but still artistically apiece with Elverum's impressive canon of songs. Wondering where to start with his vast catalogue? Dig into Exclaim!'s Essential Guide to Phil Elverum, below. "No Flashlight" is an album of transitions. Elverum's first under the Mount Eerie name, at points it feels like a look back to the very beginnings of the Microphones' bedroom recordings. But upon further listens, it's apparent that Elverum is writing/singing from (and towards and into) a new place, where instinct is favoured over intellect — and the dark is both threatening and welcome. It features assistance from Geneviève Elverum (then still Geneviève Castrée) and Jason Wall, who add more subtly moving parts (and weird wolf sounds) to the mix. It may also be one of the few recordings to later be reissued, in part, to clean up bedroom mixes, but primarily to normalize the oversize packaging so that it's, in Elverum's words, on Bandcamp, "trimmed of rambling explanations." Sauna feels like an album about sitting and resetting. Inspired by "Vikings and Zen and real life," Elverum explicitly and implicitly describes a small place of transformation where the world's extremes can be contemplated and interpreted. The sonic output from the insights gained veer wildly between gentle imagist poetry of the quotidian and roiling cosmic proclamations, both given weight by their all-caps, single-word song titles. It comes closest to what could be called classically psychedelic in Elverum's work, with its modestly baroque organ passages, female choirs and occasionally expansive track lengths. It's the sound of someone buried under Mount Eerie and viewing his way to the peak — and beyond. These two companion albums were released four months apart, like strangely delayed twins. Both albums possess a determined focus on experimentation with sound and composition, inspired by minimalism, the flattened aftermath of black metal excesses and space rock. Each album comes at things from a slightly different angle: Clear Moon is a drift of synthesizer that melts down the icy soundtrack of Tangerine Dream and pours it into an opaque glass of Elverum's own making; Ocean Roar is the more jagged and unpredictable of the two, creating calm, floating moments of inner peace, only to crash down upon them with a wave of noise and fierce undertow. In some ways, these are like an exploded and further expanded view of 2009's Wind's Poem, reaching into that album's moonlit clockwork and examining each cog and spring for its place of origin. The findings on display resemble everything from Popol Vuh to Twin Peaks soundtracks to mid-'90s British shoegaze and Elverum's beloved Norwegian metal. 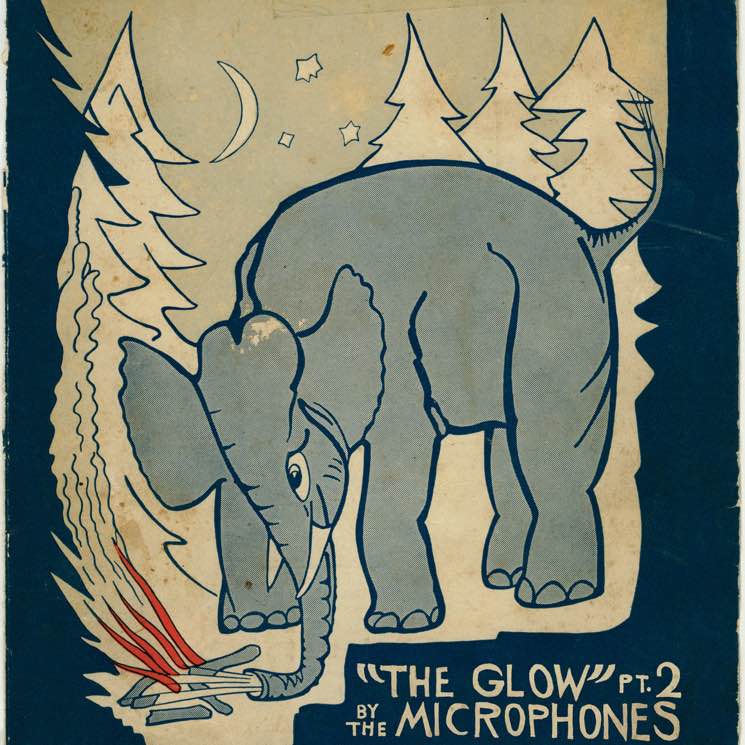 Around the turn of the century, Elverum was living in Olympia, WA and soaking in the modest (and now modestly legendary) art/indie rock traditions that had pooled there, especially those surrounding the K Records family. One of the bonuses of these connections turned out to be unlimited access to label boss Calvin Johnson's Dub Narcotic Studio.

The Glow Pt. 2 reveals Elverum's growing confidence as a writer and arranger, the songs still crackling with the energy of being quickly captured to tape, but now with an expanded framework and new colours that are especially vibrant to an early-20s mind. The genius of the songs is how they exist as moments in time, brief sketches of an emotion or a flaring memory, but also speak to something larger and less concrete. They successfully touch the universal in both ways. Lost Wisdom was allegedly unplanned and quickly recorded when Julie Doiron and Fred Squire visited Elverum after the end of a tour, and before starting a recording session of their own in Olympia. For a lifelong Eric's Trip fan, to work with one of his favourite singers was a circle made full.

The songs are indisputably Mount Eerie, full of love made obscure by fog and time's ravages, but simpler and more immediate than ever. Doiron and Elverum's voices have similarly unfaltering ease and gentle delivery, and as such mesh at an organic level, suggesting the stone path leading up to the small wooden house in both lyric and sound.

What is particularly lovely is really hearing the room on record: thumbs on guitar strings, breaths taken in, chair creaks or the quiet slap of a cable on a wooden floor. You can feel the presence of the three people here, in the throes of making living, breathing music — and then having this brief and beautiful document as a result. There's no shortage of material out there to amuse and confound completists, and unless you find yourself in that unenviable position, there is likely no reason you would casually come across or desperately want to hear 2003's The Drums from "Mt. Eerie," or The Singing from "Mt. Eerie," or 2005's The Drums from "No Flashlight."  These may be windows into Elverum's technique and pure love of sound, but only real diehards will be ready to share the love.

Another contentious release is Pre-Human Ideas from 2013, wherein a batch of songs, primarily taken from the previous year's Clear Moon, were fed into GarageBand and Auto-Tune, then spilled back out with strange and varied results. Some vocal parts are mechanized and granular, while others are reassigned by gender or even age. The album can be appreciated by some as a deconstruction of his art, but an equally valid argument can be made that it resembles talking in cartoon voices after a hit from a helium balloon. 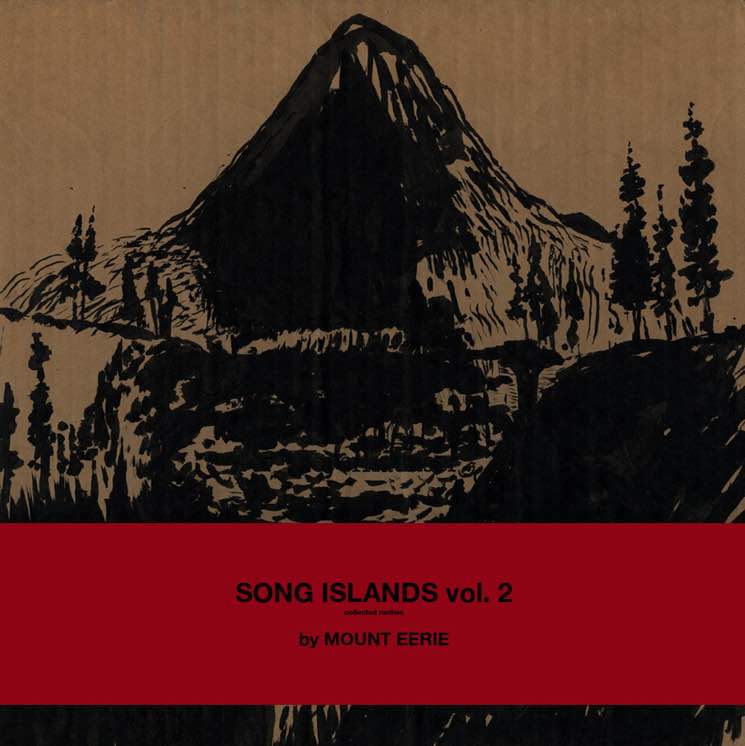 If diving into Elverum's impressively extensive back catalogue intrigues you, then starting with 2002's Song Islands and 2010's Song Islands vol. 2 is recommended. The former comes from the Microphones era, while the latter collects Mount Eerie tracks. Both feature some songs that didn't quite fit on albums and others that were later reworked and adopted into forever homes, but they also work very well as collections that exhibit the different stages of Elverum's musical growth.

If you had to choose one EP, then the 2008 ten-inch Black Wooden Ceiling Opening would be perfect. Featuring help from Jason Anderson and Kjetil Jenssen, this is a quick distillation of everything that Mount Eerie was in the mid-2000s, and points the way that the project was headed. It benefits from its relative concision and the fuller band approach, but also has a compelling feeling of abandon that doesn't always shine through in other works. It also comes closer to actual metal than anything else in the Elverum canon.