By Brock Thiessen
Published May 30, 2019
Leon Redbone — the famously old-timey singer-songwriter — has died. While an announcement on his website jokingly stated he was was 127, Redbone was in fact 69.

Redbone passed away this morning, according to the post, leaving behind a long and rich musical history. No cause of death was given.

The announcement reads as follows:

It is with heavy hearts we announce that early this morning, May 30th, 2019, Leon Redbone crossed the delta for that beautiful shore at the age of 127. He departed our world with his guitar, his trusty companion Rover, and a simple tip of his hat. He's interested to see what Blind Blake, Emmett, and Jelly Roll have been up to in his absence, and has plans for a rousing sing along number with Sári Barabás. An eternity of pouring through texts in the Library of Ashurbanipal will be a welcome repose, perhaps followed by a shot or two of whiskey with Lee Morse, and some long overdue discussions with his favorite Uncle, Suppiluliuma I of the Hittites. To his fans, friends, and loving family who have already been missing him so in this realm he says, 'Oh behave yourselves. Thank you…. and good evening everybody.' 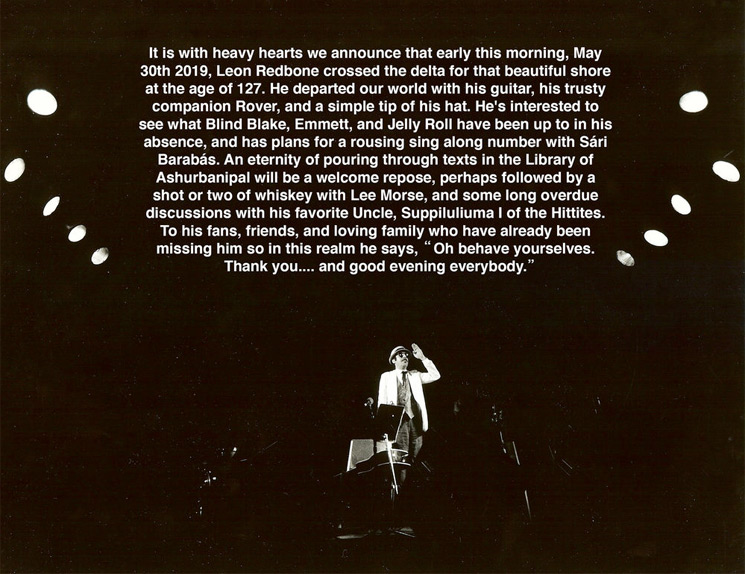 Redbone retired from music in 2015 due to health reasons, and at the time he teamed up with Jack White and his Third Man Records for a series of archival releases. Redbone's legacy was also celebrated with the 2018 film Please Don't Talk About Me When I'm Gone: The Search for Leon Redbone.

Making for an interesting Canadian connection, the Cypriot-American singer-songwriter first appeared onstage in Toronto in the mid-'70s. He soon became known for his unique fashion combo of a Panama hat, dark sunglasses and black tie — not to mention his purposely old-timey persona that delved into vaudeville and the Tin Pan Alley-style music of the late 19th century.

Throughout Redbone's career, he released 16 full-length albums, starting with his 1975 Warner Bros. debut On the Track. This was later reissued by White, as well as a collection called Long Way from Home that consisted of songs captured in 1972.

In addition to Jack White, Redbone had many other famed followers. A brief glance at the gallery of his website shows him rubbing shoulders with the likes of Neil Young, Bob Dylan, Ringo Starr and Alf (yes, the alien from the '80s sitcom).

Besides all Redbone's work in music, he branched out into the world of acting and voiceover work in his career, where he would ham up his love for old-timey Tin Pan Alley-era music and, often, alcohol. Redbone also sang the theme to the '80s sitcom Mr. Belvedere and Harry and the Hendersons.

Redbone was also a regular on the early episodes of Saturday Night Live, as well as appeared on Johnny Carson's Tonight Show and had an acting role on Life Goes On. He also voiced the snowman in Will Ferrell's classic Elf, as well as did a duet of "Baby, It's Cold Outside" with Zooey Deschanel for the film.