By Gregory Adams
Published Mar 27, 2014
After first teasing an upcoming reissue of the Creepshow soundtrack over Instagram, reissue pros Waxwork Records have unfurled all the ooky details behind their vinyl edition.

While an official due date has yet to be locked down, pre-orders for the record go up on April 1. As previously reported, the George A. Romero-directed horror anthology, which was written by macabre master Stephen King, featured a score from John Harrison. According to a press release, the master tapes were recently found in an attic at Jeree Recording Studios in New Brighton, PA, and have been given a makeover for the reissue, remixed and remastered specifically for vinyl.

The soundtrack features 34 scarifying cues and incidentals, and will be served up on a variety of different colour combinations, with each version referencing one of the tales contained within Creepshow. The "Father's Day" variation is served up on "cake icing vinyl with blood clot splatter"; "Something to Tide You Over" is on "transparent ocean blue vinyl"; "The Lonesome Death of Jordy Verill" is delivered on transparent "meteor shit" green vinyl; "The Crate" is offered up on "fluffy fur gray vinyl with blood clot splatter"; and "They're Creeping Up On You!" is wretchedly represented with a "cockroach brown" colour variation.

Creepshow comes housed in a gatefold jacket featuring artwork from Ghoulish Gary Pullin, and contains essays from Romero and Harrison, a booklet built into the record sleeve that features production stills and artwork, and a 12x12 print of the Creeper. You can get a glimpse of the inside booklet below, while the cover art is above.

This is the second Waxwork soundtrack saluting Harrison and Romero, following the label's 2013 reissue of the Day of the Dead score. 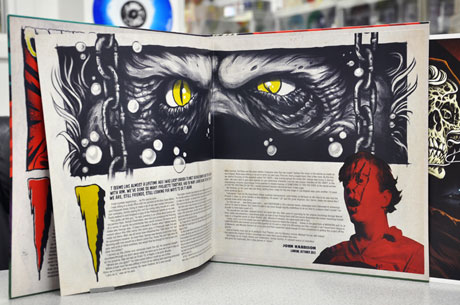