By Exclaim! Staff
Published Apr 07, 2017
It's Friday again, which means we're taking another look at our new Exclaim! feature, Charts, up there between Concerts and the Trending 21. With a little help from our friends at BuzzAngle, you can now find — and customize — Canadian sales and streaming data for albums, artists and songs.

Want to know the song most streamed by Canadians this week? How your favourite artist's new album faring on the charts? Well, now you can.

In the ongoing interest of keeping track of what's going on in the Canadian market, we've taken this week's (March 31 to April 5) data for Top Albums sold and streamed (referred to by BuzzAngle as "Album Projects"*) and analyzed it to see what's going on. Here's what we found. 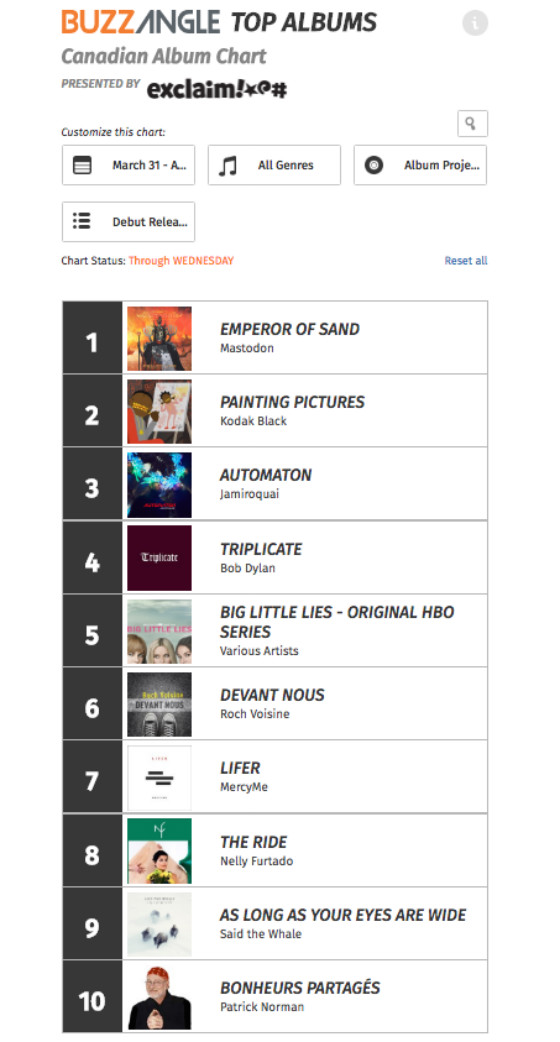 Up above, you'll see a chart of the data for the top ten albums that came out this week. Ruling the roost is Emperor of Sand, the latest opus from metal maestros Mastodon. In our review of the record, we praised the band's seamless weaving of their metal and prog influences, not to mention their ability to "balance might and mastery of their instruments without things verging on overindulgent." It's their best in a while, so it's nice to see it getting some shine.

The following three records rounding out the top four are Exclaim!-approved, too. Kodak Black's new one, Painting Pictures, came in at number two, while Jamiroquai's surprisingly "inspired" new album, Automaton, came in third. Following that is Bob Dylan's latest covers record, Triplicate, which we said "proves that his ability to interpret the Great American Songbook is […] worthy of recognition."

Canadian vets like Roch Voisine and Nelly Furtado snuck into the top ten, too — the latter for her fascinating return to music, The Ride — as did Said the Whale with their "mature and finely tuned effort" As Long as Your Eyes Are Wide.

Of course, those are just the albums released March 31; below, you'll find a chart of the most streamed and purchased albums overall, regardless of release date, for the week to date in Canada overall. Drake is still topping Ed Sheeran, and the Weeknd's Starboy still looks immovable. Drake's VIEWS even snuck back into the chart, despite being released almost a year ago. 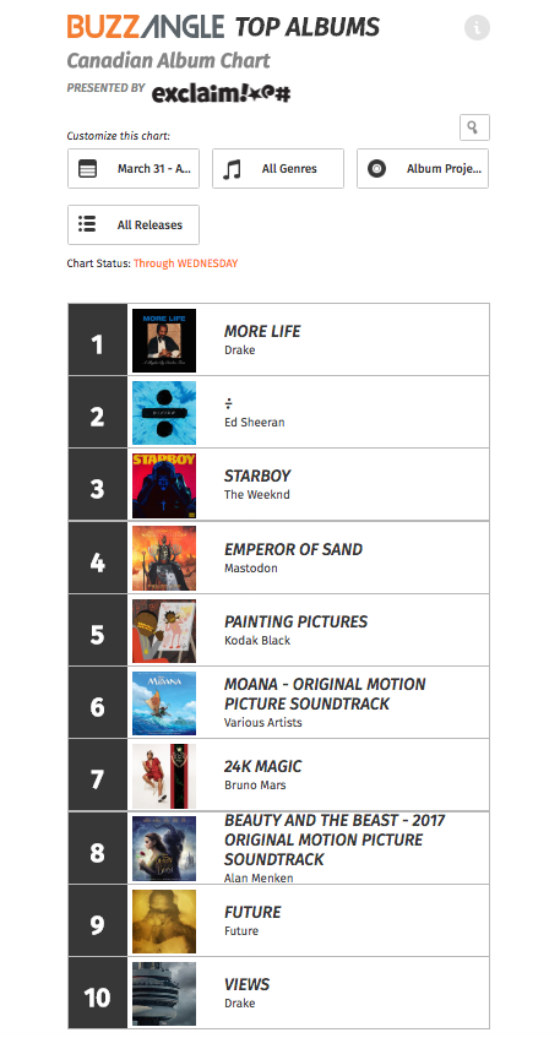