By Josiah Hughes
Published Nov 02, 2017
Since leaving Blink-182, Tom DeLonge has surprised us all by proving himself to be an award-winning UFO researcher and launching a multi-faceted tech startup called To the Stars Academy that plans to, among other things, build a spaceship. The former pop-punker who was best known for his dick jokes is really delivering on his promises, and he's tired of people giving him shit for it.

Last week, DeLonge made a lengthy appearance on The Joe Rogan Experience podcast. The 100-minute interview saw DeLonge delve into his many esoteric beliefs and the goals he's set with his To the Stars Academy. As a result of the appearance, however, a number of people have called him crazy.

In a series of since-deleted tweets (which were captured by Reddit and are available to view below), DeLonge wrote, "Big things coming. It's easy to call it crazy... I get it. But- In the end it will be unnerving to be wrong."

He added that reading the biographies of his To the Stars partners "should make you think twice about the words you choose."

Find DeLonge's deleted tweets below along with a video and another tweet that features a surprisingly phallic drawing atop the To the Stars bio. Even if it's not on purpose, DeLonge apparently still has plenty of dick jokes to deliver. 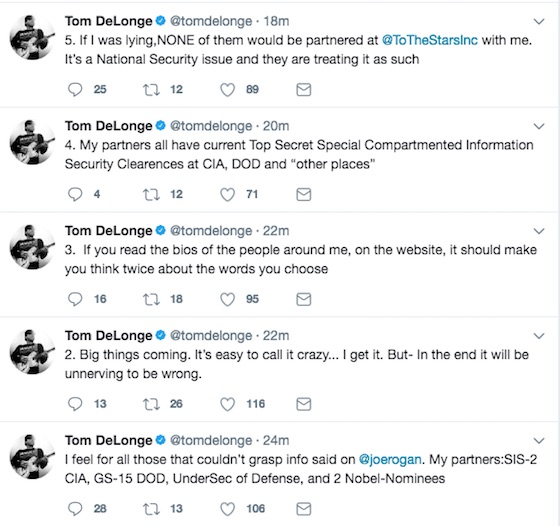 Focus on the TEAM who owns To The Stars Academy. @joerogan unfortunately didn't see this. But you all should- https://t.co/hYPI5WKA39 pic.twitter.com/B1Fdkok2UO