Drizzy still got the last laugh, though

By Sarah Murphy
Published May 24, 2019
The beef between Raptors superfan Drake and the Milwaukee Bucks continues to heat up, and Bucks owner Wes Edens' daughter Mallory is even getting in on the action. Mallory Edens attended the Game 5 in Milwaukee last night (May 23) and sat in the front row wearing a Pusha-T shirt.

The T-shirt featuring Pusha's face was, of course, a poke at Drake's infamous beef with the rapper that took over the better part of last year.

Edens shared a photo of herself at the game with a woman sipping a drink in the row behind her — likening her to the Kermit sipping tea meme.

Unfortunately for her, Drake's beloved Raps won the game, and he commented on Edens' Instagram post, "That's me in the second row."

Adding insult to injury (and proving that he is the pettiest man of all time), Drake then copped a photo of Edens and made it his profile picture on Instagram.

He even chirped Edens in his Instagram story. He shared a photo of Edens in her Pusha-T shirt and wrote, "All is fair in war and war" — but added "trust me I'll still get you tickets to OVO Fest." 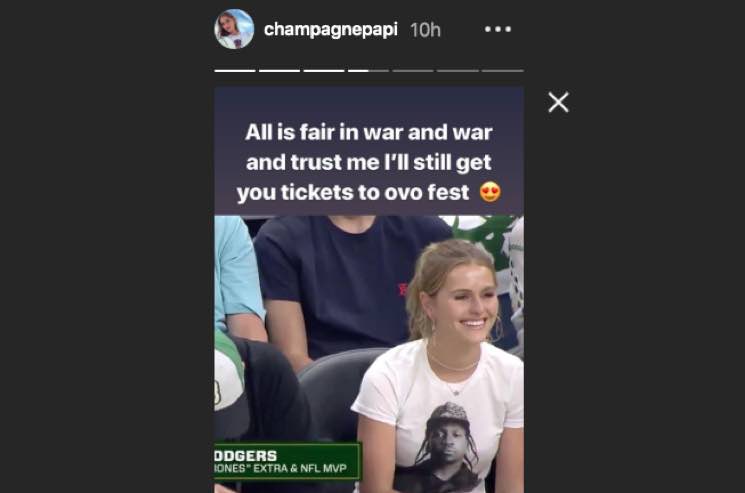 The feud could come to an end tomorrow night (May 25) when the Raptors and Bucks play Game 6 at home. Though it's also entirely possible that Drake cursed his team by predicting that they would go to the NBA finals.

See his post-game speech below.

#raptors one game away from the #nbafinals and the moment we had a surprise scrum with @drake @CityNews @680NEWS pic.twitter.com/TgNeVfzw5I