By Brock Thiessen
Published May 29, 2020
With race tensions in the U.S. spiralling out of control, the 1975 singer Matt Healy has made Twitter all kinds of angry by promoting his own band's video with a Black Lives Matter tweet about George Floyd. In fact, the reaction has been so bad, Healy has left Twitter altogether.

In a now-deleted tweet, Healy — a white man — reacted to the killing of the African-American by writing the following: "If you truly believe that 'ALL LIVES MATTER' you need to stop facilitating the end of black ones."

Then he linked to the 1975's video for their song "Love It If We Made It" — a move not sitting well with much of the Twitterverse.

You can see the deleted tweet below via Metro. 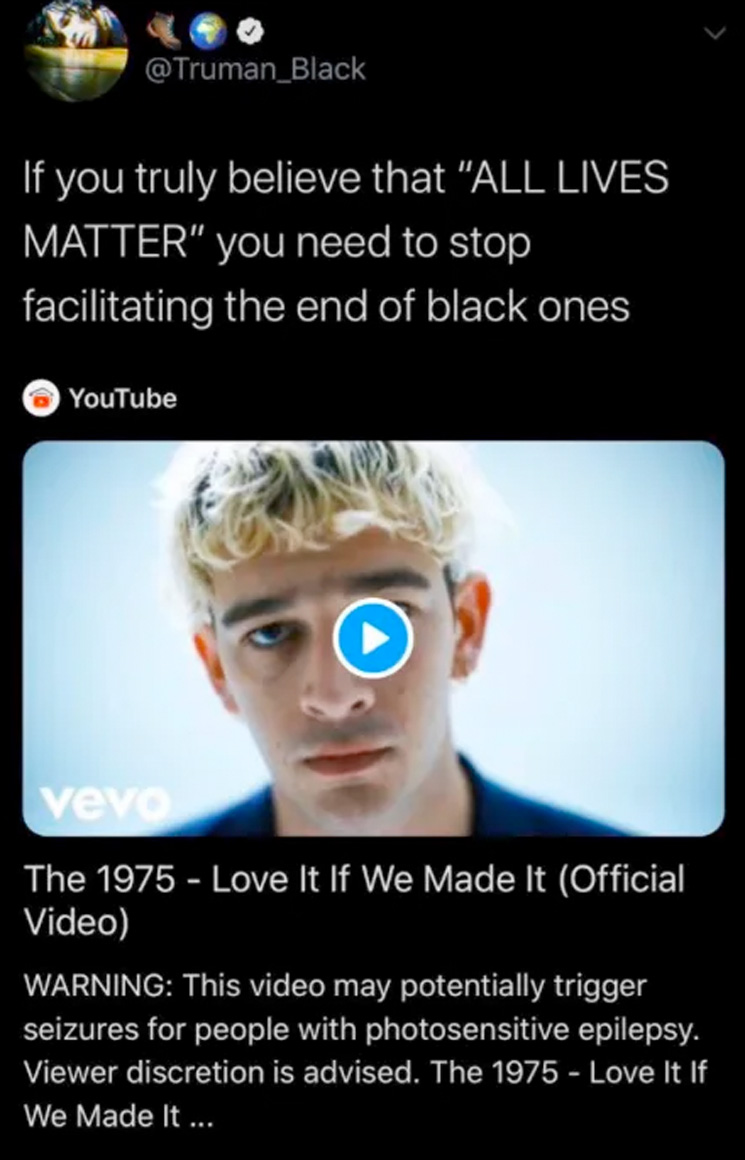 Floyd, a 46-year-old black man, was killed earlier this week after a white Minneapolis police officer knelt on his neck for five minutes during an arrest while he repeatedly said he could not breathe.

Quickly, Healy was met with backlash over the tweet, as many accused him of using the situation to promote his own work. The backlash eventually got so bad that Healy tweeted an apology and then promptly deleted his account of over 1 million followers.

As Metro reports, the apology read, "Sorry I did not link my song in that tweet to make it about me it's just that the song is literally about this disgusting situation and speaks more eloquently than I can on Twitter."

To refresh your memory, the 1975's "Love it If We Made It" includes the lyrics, "We're fucking in a car, shooting heroin / Saying controversial things just for the hell of it / Selling melanin and then suffocate the black men / Start with misdemeanours and we'll make a business out of them."

Despite all this, Healy has decided it is fine to leave his Instagram account active, where he has been making multiple posts about Floyd's death.

so matty healy deactivates instead of deleting and apologising and sharing donation links? go on, continue to stan him pic.twitter.com/C2TQAnx1MY

I'm black & a major fan of the band so let me say this... What he did was a bad move & come across as insensitive. Yeah he was trying to share how he feels but the posting a link to the video wasnt the way to do it, but that doesnt mean he shouldve gotten bullied off twitter.

more proof that he's an extremely privileged white man who consistently uses his platform to preach but takes no action himself? He ain't it x

matt healy deactivating his page after being called out for not speaking up, doesn't make sense to me. as a fan, i know the group claims to be very aware of what's going on in this messed up society so i don't get it. example:
you guys forget you said this? @the1975 pic.twitter.com/eGFSMBCOFV