By Sarah Murphy
Published Dec 19, 2017
Taylor "I couldn't have asked for a better year" Swift is rounding out 2017 with the launch of her brand new app, the Swift Life, but since arriving in the U.S. App Store on Friday (December 15), it's already caused quite a bit of controversy.

Designed as a social media haven of all things Swift, fans have certainly been expressing themselves with Taymojis and watching exclusive video clips, but some fan interactions have already spawned fierce debates and backlash.

Despite their shared love of the pop star, Swifties aren't getting along in the comments section when it comes to politics. An app user by the name Britt (@delicatebrittanie) posted a message defending U.S. President Donald Trump, which quickly garnered bunch of likes — but drew criticism from left-leaning fans.

Why tf does this post have so many likes? The swift life is cancelled. We don't claim apps full of trump supporters pic.twitter.com/NQxHgyr13S


And although Britt claimed that not all Trump supporters are "bigoted, sexist homophobes," other comments on the same post didn't lend much strength to that theory. One comment read: "I just don't accept gays lesbians and bisexuals."

so apparently whilst i was asleep the swift life turned into a hot ass mess for republicans and homophobes to vent on...The pic.twitter.com/HSwHrgCz5r


Britt has since deleted her posts about Trump, declaring that there will be "no more political posts from me." 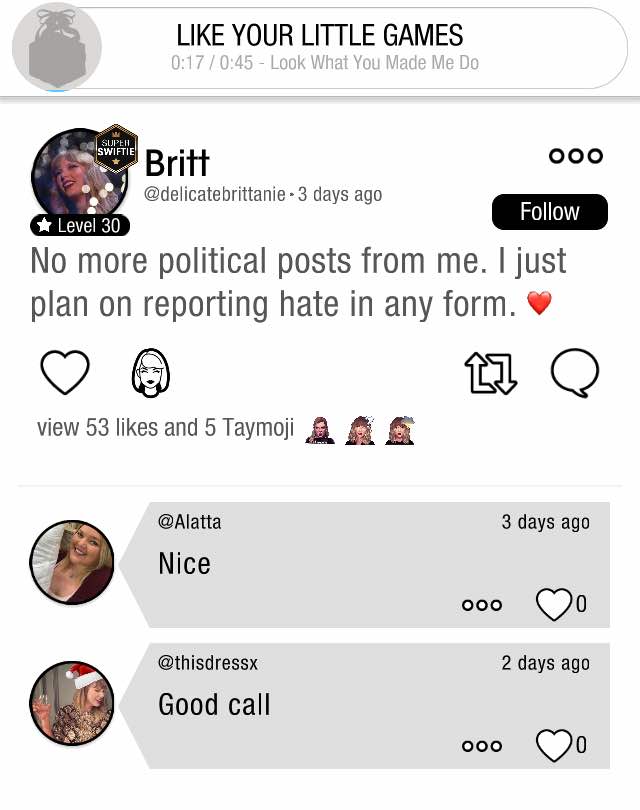 The politically charged posts have received plenty of criticism from fans arguing that inflammatory comment wars are distracting from the ultimate goal of gushing over their shared Swift love.

Swift, of course, has remained silent on the in-app controversy.

Earlier this year, she refused to publicly denounce white supremacists, even after her legal team confronted a blogger over a post alleging that Swift's music served as a rallying cry for the alt-right. Swift's lawyers maintained that the piece was "provably false and defamatory," but the ACLU criticized them for using intimidation tactics to suppress free speech. The pop star has yet to publicly address the ordeal.

Many Swift Life users and critics have spoken out about the singer's latest controversy, however, and you can see a selection of those responses from Twitter below.

The Swift Life: beomes a breeding ground for racist and homophobic swifties in the 3 days since its US-only release

Me trying to dodge trump supporters while following people on The Swift Life pic.twitter.com/dAmaBtv0mn

yeah we are sick of being called nazis and trump supporters because we like a fucking pop star. I am a lot more than a Taylor Swift fan. So all of my life's work doesn't matter because I like Taylor Swift? All the sexism I have stood up for in the music industry doesnt matter?

I downloaded Tay's app and before you start criticising me I'm a trump supporter.
I don't see why people talk politics in there???? Like helloooooo let's talk about our fav. We should support Taylor and I'm so disappointed she didn't have one million downloads a minute 😔 pic.twitter.com/pwg15xcRvX

swifties on the swift life: i support trump and i dislike gay people but everyone still deserves to meet taylor no matter their political beliefs!
me: deletes app

Exactly why I'm not on The Swift Life anymore. And to the person who says they don't accept gay, lesbian, or bi people, Taylor DOES accept us and I guess you should find someone new to stan because she doesn't tolerate homophobia. https://t.co/6HIxsmW71p

I don't get how you can't swear on The Swift Life but can openly support Trump and have white supremacist bullshit on it???? Lmfao okay then.

Swift's album Reputation is available on picture disc and CD through Umusic.