By Gregory Adams
Published Jun 11, 2015
Sprite's "Obey Your Thirst" campaign has long attached itself to the hip-hop scene. Now, the soda makers are taking an extra step towards pop-rap synergy by placing lyrics from the likes of Drake, Nas, the Notorious B.I.G. and Rakim onto their pop cans.

The citrus-flavoured Coca-Cola brand beverage announced its "Obey Your Verse" collection today (June 11), with a press release calling the project an "homage to some of the most admired lyricists of all time." The first wave includes 16 limited-edition package designs that are plastered with inspirational lyrics from the aforementioned rappers. These are being printed on various Sprite cans and bottles, and will be in North American stores until the end of the summer.

The press release further explains that the four rappers were selected "based on their reputation for being true to themselves through their music and advancing the culture." It's also assumed that a Drizzy line like "Know yourself, know your worth," from "0 to 100," pairs nicely with the super sweet taste of Sprite.

"Legacy means everything to me," Nas said in a statement. "When I wrote these lyrics, I never imagined my fans would someday have the opportunity to enjoy a can of Sprite and experience my art in a totally original way."

A full breakdown of what lyrics will be presented on the packaging can be found below. 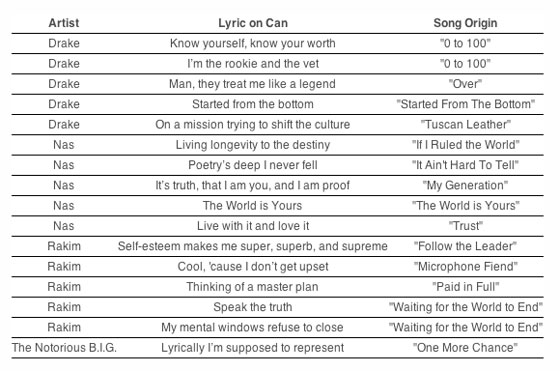 Sprite has been promoting its product with the help of hip-hop for nearly 30 years, starting with a 1986 commercial that featured Kurtis Blow rapping about the soda's "tough" lemon-lime taste. Since then, artists like A Tribe Called Quest, Missy Elliott, Common, KRS-One, Grand Puba, Pete Rock & C.L. Smooth, Grandmaster Flash, Afrika Bambaataa and more have signed on to promote the pop brand.

And, of course, who could forget the time Drake revealed himself to be a Sprite-powered android that can only get through studio sessions after slurping down the clearest of caffeine-free soft drinks? You'll find that particularly terrifying promo down below.

"Sprite recognized and respected the power of hip-hop early, and it became a part of the brand's essence decades ago," North American Sprite Brands and Flavors vice-president Kimberly Paige explained. "By honouring and recognizing great lyricism from some of the genre's biggest icons on our product packaging, we're demonstrating how Sprite continues to support hip-hop artists that remain true to themselves."