By Alex Hudson
Published Aug 17, 2015
Sinéad O'Connor's touring plans have been going rather badly as of late. Last month, the Irish star cancelled the rest of her summer dates, and now she has spoken out to accuse her booking agent of ripping her off. She is apparently preparing to launch legal action against her former team.

On Facebook, O'Connor posted an image (below) of an insurance document from a series of three live concerts in Germany this past May. It shows that her performances generated 47,700 ($69,350 CAD), but while her booker Rita Zappado of the Modus in Rebus agency claimed 11,200 ($16,284 CAD) in commission and production costs, O'Connor's fee was a comparatively low 500 ($730 CAD).

Making matters worse, Sinéad claims that she never actually got the 500 and was instead docked 4,000 (around $5,815). She promised to sue her ex-managers over the matter. Read Sinéad's statement below.

For further information, check out the post on Facebook; the singer made numerous comments below the original post, detailing other shows that she wasn't paid for. In one of these comments, she claimed, "I was falsely led to believe by her and my team I was legally obliged to pay and did pay consequently."

Observe below... What I got paid for three shows in Germany, FIVE HUNDRED EURO as compared to what everyone else got paid. The last two figures on this list amount to what the agent Rita Zappador and Modus In Rebus got, 11,700.00. The 47,700.00 is the total of what my four and a half hours' work generated. Pls note the document is page 9 of 7! This is the type of dodgy documents we are being provided with. This is the sodding insurance document !!! In the end the agent didn't even pay me the five hundred. SHE DOCKED ME FOUR THOUSAND! So my work generated almost 48k but cost me 4k. Pls note bands do not arrange these things themselves. One's business managers and agents do. One trusts one is not being lied to when one is seduced to go on tour by being assured of earnings. Our job is to shake our asses and sing nice. Management's job is to fight off every cunt that wants to rip us off. MASSIVE negligence cases to be brought by me against every member of my now ex management team. Not only for the below but for several even more appalling and wreckless negligences, which have cost me hundreds of thousands of euro which I was illegally told was my obligation to pay, and it was NOT my legal obligation. In short I have been ass raped by Rita Zappador and Modus in Rebus with the full (written, and totally behind my back, without my knowledge) support of Simon Napier Bell, Bjorn De Water and my now ex accountant. ALL of whom need to lawyer up, and get ready for the fraud squad. 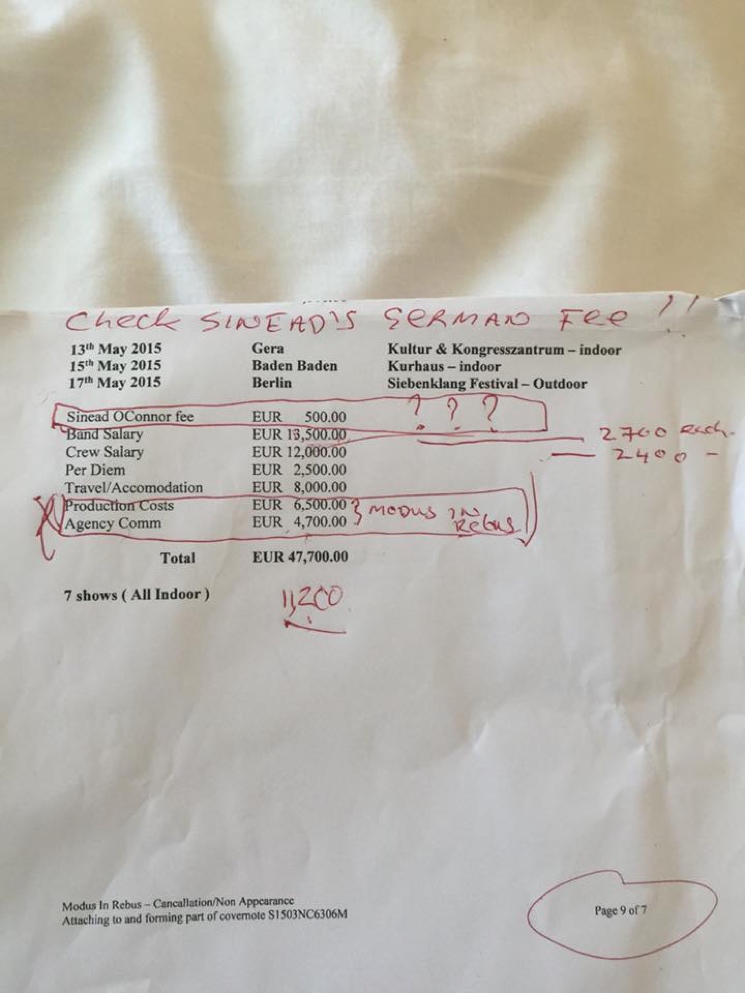