By Calum Slingerland
Published Oct 16, 2020
After Paper Bag Records' Vintage imprint brought a You Say Party release back to wax for Record Store Day 2020, the label has now announced plans to do the same for the debut album from the Rural Alberta Advantage.

The RAA will reissue their 2008 debut Hometowns for the third and final RSD Drop day, set for October 24. The album will arrive in a limited edition of 300 pressings on blue and yellow splattered vinyl, which you can get a look at below.

To mark the occasion, the band will take part in a socially distanced, COVID-compliant, outdoor record signing (weather permitting) at Toronto's Tiny Record Shop (777 Queen Street E) on October 24 from 9:30 a.m. to 11:00 a.m.

The first 50 guests to pick up Hometowns reissue will also collect a free 7-inch (of only 100 pressed) featuring RAA covers of Tammy Wynette's "Stand by Your Man" and the Human League's "Fascination."

For fans outside of Toronto, a limited quantity of 7-inches will be available at Halifax's Taz Records, Blackbyrd Music in Edmonton and Calgary, and Vancouver's Red Cat Records. 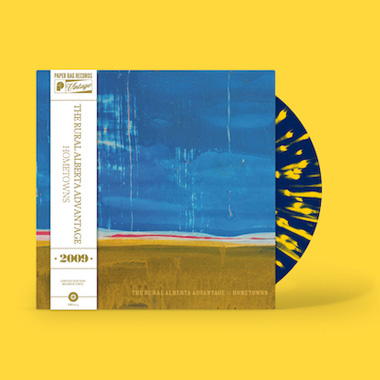