By Josiah Hughes
Published May 10, 2017
It's almost impossible to believe, but there was a time when Christian indie rock was an incredibly fertile, high-quality subgenre. While the so-called scene has since died down, and members have moved on to other projects and, in some cases, other beliefs, there's no denying that they made some great music along the way. Now, some of the subgenre's best and brightest have formed a supergroup.

Called Lo Tom, the band's lineup is enough to have anyone familiar with this world salivating — David Bazan plays bass and sings, and he's joined by regular collaborator TW Walsh and Starflyer 59's Jason Martin on guitars. Drumming duties are handled by Trey Many of His Name Is Alive (and also a former Pedro the Lion touring member).

Better than the lineup is the fact that the music actually sounds really good. Like classic Pedro the Lion, the band's lead single "Overboard" is a straight-ahead rock song that embraces subtlety over studio theatrics. It's a post-Christian rock miracle!

Lo Tom will release their self-titled debut on July 14 through Barsuk. Until then, check out their musical history together with the handy chart below. 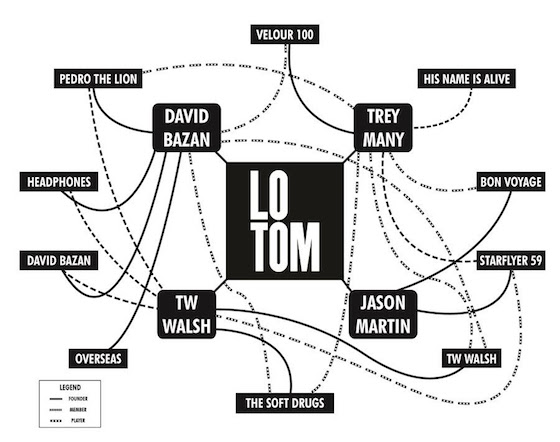