By Calum Slingerland
Published Dec 13, 2016
Despite promising four new albums around this time last year, Lupe Fiasco has now announced that any and all future plans to record have been cancelled.

Taking to Twitter today (December 13), the rapper tweeted, "I get the hint God. Yo Lupe fans it's been fun and I hope you've had fun. I'm officially not releasing anymore music. Albums cancelled."

Judging by earlier tweets from Lupe's now-locked account, a freestyle titled "N.E.R.D" was pulled from SoundCloud for hate speech, prompting him to announce, "I'm done."

Last year, Lupe announced that three albums would arrive in 2016, along with The Cool 2 in 2017 to mark the 10 year anniversary of its predecessor. His last album came in 2015 with the release of Tetsuo & Youth. 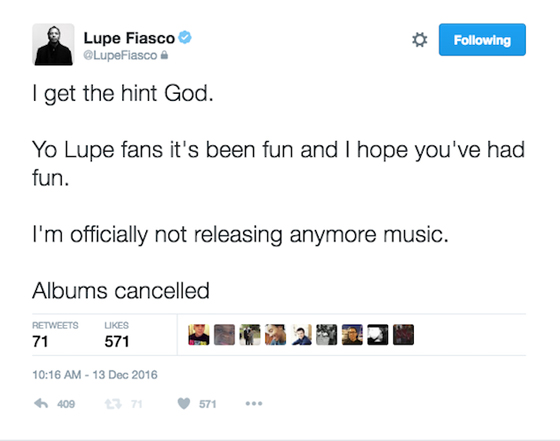