Like with Kankyō Ongaku and predecessor Even a Tree Can Shed Tears: Japanese Folk & Rock 1969-1973, most of the tracks of Pacific Breeze have never seen release outside Japan. Among the artists included are Yellow Magic Orchestra heroes Haruomi Hosono and Yukihiro Takahashi, as well as Hiroshi Sato, Shigeru Suzuki, Taeko Ohnuki, Minako Yoshida and Hitomi Tohyama, among others.

LITA explains of the release: "Pacific Breeze is an expertly compiled collection of choice cuts that range from silky smooth grooves to innovative techno pop bangers and everything in between. Long-revered by crate diggers and adventurous music heads, this music has never been released outside of Japan until now."

All music within has newly remastered audio, and in addition to s CD version, a 2-LP set will arrive on both black vinyl and "Beach Ball" tricolour wax. Both vinyl versions come with "a deluxe wide spine jacket with oversized fold-out booklet, full color printed inner sleeves, and custom die-cut obi card."

The comp comes featuring a newly commissioned cover painting by Tokyo-based artist Hiroshi Nagai, whose iconic images of resort living graced the covers of many classic City Pop albums back in the '80s. You can see that above, as well as the check out the deluxe coloured vinyl version below.

You can pre-order the set over here now at LITA, which also has an exclusive bundle that includes a a 24"x 24" art print of Hiroshi Nagai's cover art and a deluxe full-color 30" x 60" beach towel featuring the same. You can also now sample the entire release now over on LITA's website. 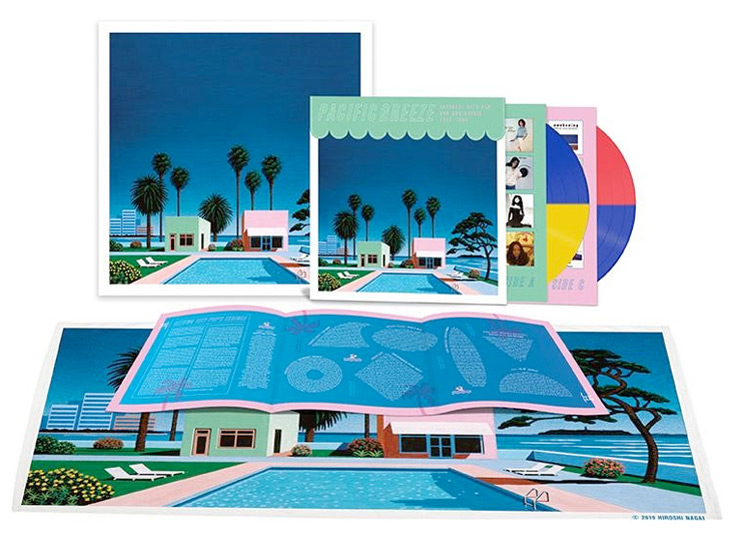