By Sarah Murphy
Published Sep 09, 2016
The Tragically Hip brought fans across the country together with the broadcast of their final "Man Machine Poem Tour" show from Kingston last month, sharing both their beloved music and an important message with those watching.

Frontman Gord Downie called on Prime Minister Justin Trudeau to repair the government's relationship with Canada's First Nations, and now the musician has announced plans for a brand new solo album that hears him reflecting on the difficult road to truth and reconciliation.

Secret Path will arrive on October 18 through Arts & Crafts, and it will be accompanied by a graphic novel and an animated CBC television special. Proceeds will go to the National Centre for Truth and Reconciliation, which is dedicated to educating Canadians about the history of residential schools and moving towards a future of reconciliation.

Each component works together to tell the story of Chanie Wenjack, an indigenous boy who died trying to escape a residential school in 1967 near Kenora, ON — a story Downie learned about through his brother Mike Downie and Ian Adams' 1967 Maclean's story "The Lonely Death of Charlie Wenjack."

The album was produced by Kevin Drew and Dave Hamelin, and was recorded at the Bathouse Recording Studios in Bath, ON, over two sessions in November and December of 2013. Downie sings and plays guitar, whil Drew and Hamelin take on multi-instrumentalist roles, in addition to guest performances from Charles Spearin on bass, Ohad Benchetrit on lap steel and guitar, Kevin Hearn on piano and Dave "Billy Ray" Koster on drums.

An accompanying 88-page graphic novel was written and illustrated by Jeff Lemire, and it will also arrive on October 18 via Simon & Schuster. It will be available as part of a deluxe vinyl and book package, as well as a digital download and book bundle. The cover art is pictured below. 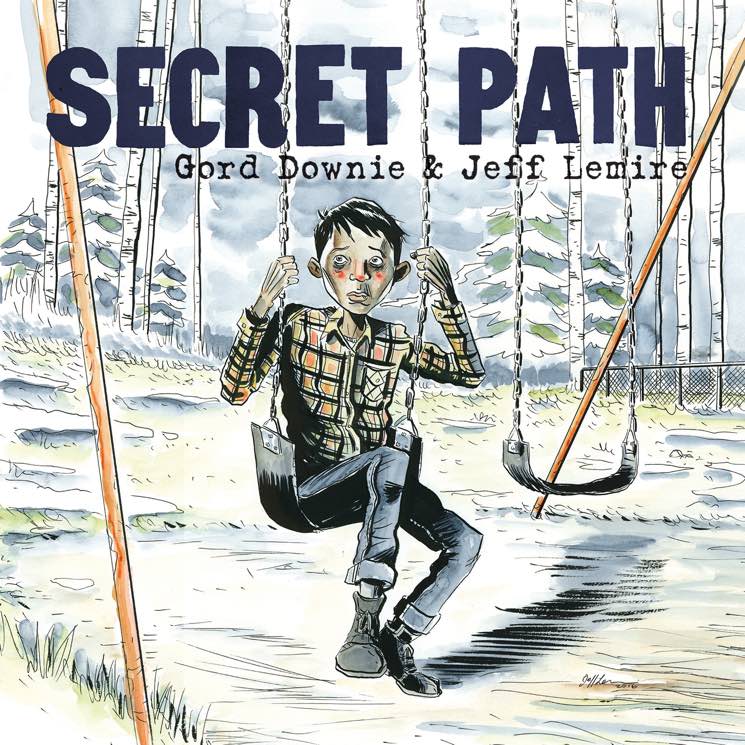 A combination of Downie's music and Lemire's artwork will come together in a special hour-long animated special also called The Secret Path, which will air on CBC on October 23 at 9 p.m. EDT. It will air on the 50th anniversary of the date that Wenjack's body was discovered — frozen just 12 miles into his journey.

Downie has shared a detailed statement about the inspiration behind the album. It reads:

Mike Downie introduced me to Chanie Wenjack; he gave me the story from Ian Adams' Maclean's magazine story dating back to February 6, 1967, "The Lonely Death of Charlie Wenjack."

Chanie, misnamed Charlie by his teachers, was a young boy who died on October 22, 1966, walking the railroad tracks, trying to escape from the Cecilia Jeffrey Indian Residential School to walk home. Chanie's home was 400 miles away. He didn't know that. He didn't know where it was, nor how to find it, but, like so many kids — more than anyone will be able to imagine — he tried. I never knew Chanie, but I will always love him.

Chanie haunts me. His story is Canada's story. This is about Canada. We are not the country we thought we were. History will be re-written. We are all accountable, but this begins in the late 1800s and goes to 1996. "White" Canada knew — on somebody's purpose — nothing about this. We weren't taught it in school; it was hardly ever mentioned.

All of those Governments, and all of those Churches, for all of those years, misused themselves. They hurt many children. They broke up many families. They erased entire communities. It will take seven generations to fix this. Seven. Seven is not arbitrary. This is far from over. Things up north have never been harder. Canada is not Canada. We are not the country we think we are.

I have always wondered why, even as a kid, I never thought of Canada as a country – It's not a popular thought; you keep it to yourself — I never wrote of it as so. The next hundred years are going to be painful as we come to know Chanie Wenjack and thousands like him – as we find out about ourselves, about all of us — but only when we do can we truly call ourselves, "Canada."

As previously reported, Downie was diagnosed with terminal brain cancer earlier this year.