By Calum Slingerland
Published Nov 24, 2016
During his birth month this year, Drake announced plans for a new "playlist" project titled More Life that would arrive in December. But after some rumours lead many to believe the project would arrive next week, the 6 God has denied any plans for an imminent release date.

Earlier this week, social media personality ItsBizkit (who reportedly texts Drake "every day") told radio station Power 105.1 that More Life would arrive on December 3, saying "shout out to Drake, shout out to OVO. More Life December 3rd, it's going down."

Jumping on the news, Worldstar Hip-Hop posted the project's art to Instagram to hype up the release, telling their audience it was coming soon. Drake himself then left them a comment, saying everyone could expect "more life more chunes more everything...just not on December 3rd."

While concrete details on what exactly the project would entail were scarce enough as it were, it seems we'll be waiting a little longer to see what else lines up alongside the Kid Cudi lyrical jabs of "Two Birds, One Stone," the 21 Savage-assisted "Sneakin'" and "Fake Love." That said, Drake did initially promise the release would arrive in December — just not on December 3, it seems.

To his credit, the 6 God has a fair amount on his plate already, including making music with Taylor Swift and Kanye West, getting his max bench press weight up and trying to pencil ESPN's Doris Burke in for a date.

Find a screenshot of Worldstar's Instagram post and hear ItsBizKit's claim around the 4:25 mark in the player below. 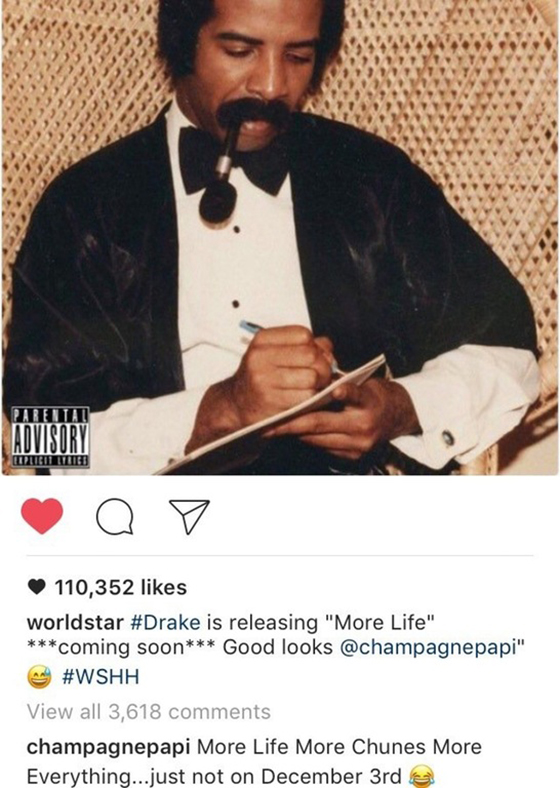