By Brock Thiessen
Published Sep 25, 2013
As soundtrack freaks should know, UK horror score hub Death Waltz has a lot in the works. Not only is the label set to issue a new Goblin 12-inch and the ever-amazing score to John Carpenter's Assault on Precinct 13, but we can soon expect soundtrack releases of Room 237 and The New York Ripper, both of which have now been fully detailed by the imprint.

Penned by Jonathan Snipes and William Hutson, the score to Room 237 is set to go on sale September 27. It will mark the first physical release of the soundtrack to the 2012 documentary, which showcased the truly obsessive nature that Stanley Kubrick's screen adaptation of The Shining has caused.

The label calls Room 237 "one of the finest modern scores we at Death Waltz towers have heard in a very long time," adding, "It's simply monstrous, a huge-sounding record that references John Carpenter, Goblin, Stelvio Cipriani, late '70s prog and early' 80s electronic music all the while with its feet firmly in the present day."

Room 237 will arrive as a 14-track CD and as a seven-song 45 rpm 12-inch, which will come packaged with the CD version. The vinyl will be pressed on 180-gram orange and red wax, with soundtrack release receiving the above image by Sam Smith as its cover art. The release date is October 22 for the CD and October 30 for the vinyl.

You can see the full CD tracklist below, where you'll also find the closing cut "Dies Irae."

As for The New York Ripper, the Francesco De Masi-penned soundtrack to the infamous Lucio Fulci slasher fest also goes on sale September 27 on LP, arriving in stores on October 22. According to Death Waltz, "tracks such as 'New York One More Night ' mix disco funk and latin to striking effect while slower tracks such as 'The Ripper' manage to capture the sleazy pre-Disney clean-up of New York perfectly with their moody sax breaks and 42nd Street atmosphere."

You can hear both those songs below, where you'll also find the artwork to the album, done by Nick Percival. The LP release will come on 180-gram vinyl, pressed on green and "yellow duck" wax. It will also come with a four-page book and poster.

On top of all these releases, Death Waltz is also planning a soundtrack release to Ms. 45, as well as a rumoured release of the score to Beyond the Black Rainbow, which was composed by Vancouver synth wizard/Black Mountain member Jeremy Schmidt (a.k.a. Sinoia Caves).

1. Recourse To Eagles
2. To Keep From Falling Off
3. Escape Pod
4. Minotaur
5. Barry Lyndon Is A Boring Movie
6. Suite 3
7. Universal Weak Male
8. Ingnorance Of Visual Information
9. They Didnt Need To Do That
10. Moon Landing
11. Everything In Focus
12. People Look Like Giants
13. This Deeper Story
14. Dies Irae 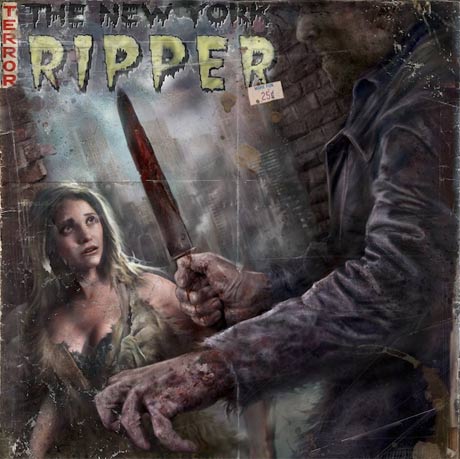