By Exclaim! Staff
Published Mar 31, 2017
It's Friday again, which means we're taking another look at our new Exclaim! Charts. With a little help from our friends at BuzzAngle, you can now find — and customize — Canadian sales and streaming data for albums, artists and songs.

Want to know what album Canadians streamed the most over spring break? What comedy album sold the most on vinyl last week? Well, now you can.

In the ongoing interest of keeping track of what's going on in the Canadian market, we've taken this week's (March 24 to 29) data for Top Albums sold and streamed (referred to by BuzzAngle as "Album Projects"*) and analyzed it to see what's going on. Here's what we found. 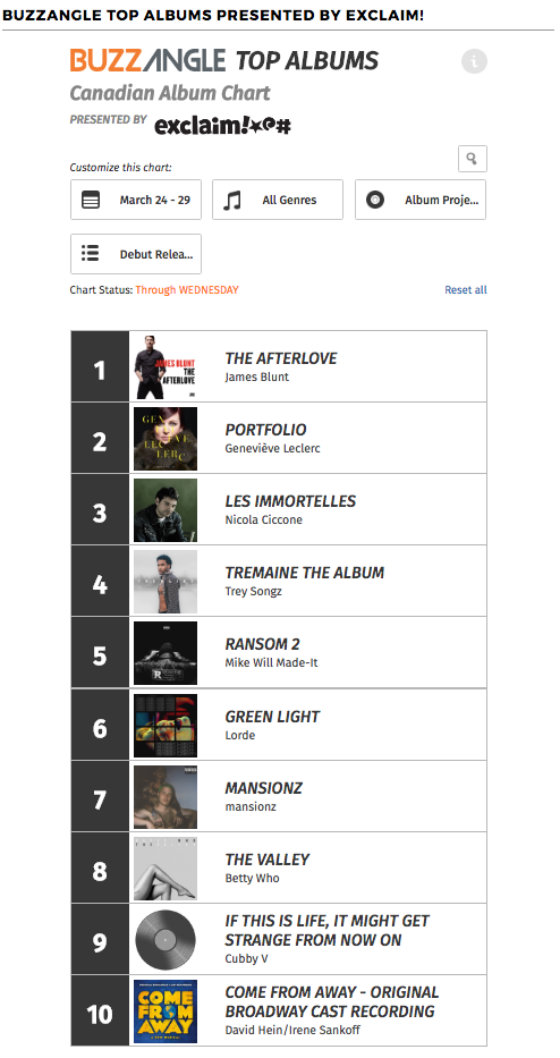 Up above, you'll see a chart of the data for the top ten albums that came out this week. Topping them all is James Blunt's The Afterlove, because apparently the "Beautiful" singer is still making music. But then, who are we to tear a strip off of him, when he does it so well?

In the top three are French-Canadian singers Geneviève Leclerc and Nicola Ciccone, while the top five was rounded out by Trey Songz's so-so Tremaine the Album and Mike WiLL Made-It's Ransom 2, an album we said "takes posse cuts and lethal production to the next level." Play that one here.

Beyond that, there's not a whole ton to buoy our spirits; sadly, albums we enjoyed just missed the top ten. The Jesus and Mary Chain's Damage and Joy came in at 11, while Raekwon's The Wild placed 12th in sales and streams.

Of course, those are just the albums released March 24; below, you'll find a chart of the most streamed and purchased albums overall, regardless of release date, for the week to date in Canada overall. Drake is still topping Ed Sheeran, but both have been there the last two weeks and will likely hold on for a good while, as the Weeknd's Starboy has done. Meanwhile, it's nice to see our March Issue cover stars Migos squeaking back into the Top Ten with C U L T U R E.

This week brings new albums like the Nelly Furtado's comeback The Ride and Mastodon's Emperor of Sand. Keep an eye on the BuzzAngle albums, artists and songs to see how they fare in the coming days. 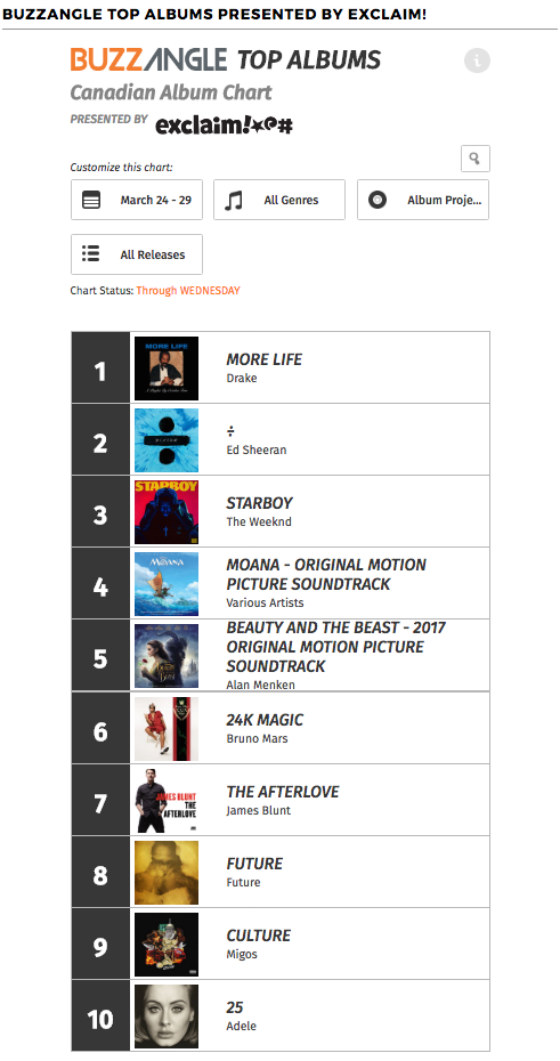