By Brock Thiessen
Published Sep 26, 2013
There once was a time where we could rely on getting a good Kanye West Twitter rant on the reg, complete with all-caps, questionable sentence structures and more than a few expletives. For better or worse, though, those days seemed to be over — or at least until tonight (September 26).

If you've been paying attention to your late-night talk-show comedy, you're likely aware that Jimmy Kimmel roped in a cast of kiddies to reenact Yeezy's recent BBC Radio 1 interview with Zane Lowe. Well, this obviously hasn't sat right with Kanye, as he's let off some serious steam on his Twitter account, dishing all kinds of hate Kimmel's way.

But it's probably better if you read Ye's words for yourself: 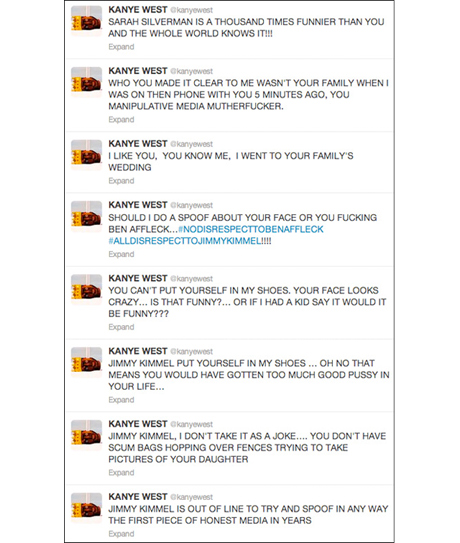 To cap it off, Kanye shared this photo and this one.

Of course, Kimmel hasn't remained silent, offering up a pile of rebuttals over on his Twitter account.

Childish? Maybe. But entertaining? Most definitely.

At this point, it's really hard to tell if this one is over, or perhaps just the beginning of a whole lot more "Beefs 2013" instalments.

UPDATE: Kimmel also addressed the whole Kanye Twitter war on his program tonight. You can check out a bit of what he said below.