By Alex Hudson
Published Aug 18, 2015
Before the Beatles stormed America, and before they found success at home in the UK, the Fab Four signed their first recording contract in Germany. Now, that first-ever German deal is set to hit the auction block as the highlight of a series of Beatles-related items from Heritage Auctions.

This is being sold on September 19 in New York as part of the personal collection of Uwe Blaschke, a German Beatles historian who died in 2010. The contract is the collection's big-ticket item and is expected to fetch around $150,000 USD (around $196,118 CAD).

This contract with Bert Kaempfert led to a 1961 session with singer Tony Sheridan in which the Beatles recorded a version of the popular song "My Bonnie Lies over the Ocean." The band members (including drummer Pete Best, as this was in the pre-Ringo Starr era) were paid around $20 each. The resulting single came out on the German Polydor label in 1961 and was credited to Tony Sheridan & the Beat Brothers. It earned some buzz back home in Liverpool, and this led to the Beatles being discovered by manager Brian Epstein. The rest, of course, is history.

"This is perhaps the most historically important Beatles document to ever appear at auction," said Dean Harmeyer of Heritage Auctions in a statement. "Without this contract, which directly led to their involvement with Brian Epstein, the Beatles may have never been able achieve their later success as a recording group. And at the time it was a momentous career milestone — they'd finally secured an actual recording deal, something they had only dreamed of before 'My Bonnie.'"

See an image the contract down below.

The entire collection includes items such as a postcard from Ringo to his grandmother, an autographed copy of "Love Me Do," a photo of George Harrison modelling a leather jacket at age 17 (above), and much more. 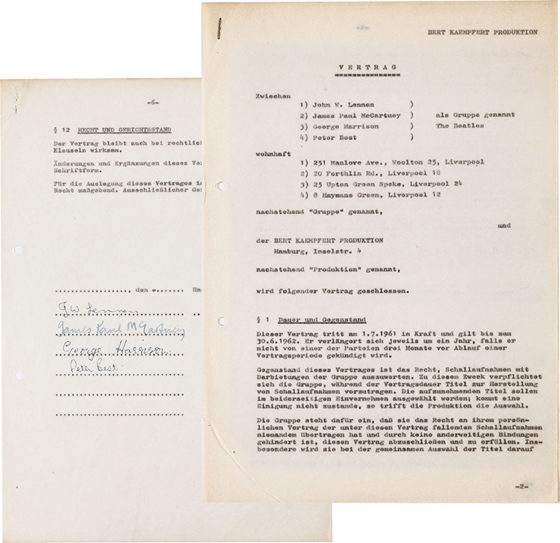